IPL 2016 final to be played in Bengaluru; Rising Pune Supergiants select Visakhapatnam as base, Mumbai Indians yet to decide

IPL 2016 final to be played in Bengaluru; Rising Pune Supergiants select Visakhapatnam as base, Mumbai Ind

IPL on Friday picked Bengaluru as the venue for its finale and offered four alternate home options to the state's affected franchises.

New Delhi: Its schedule thrown haywire after the Bombay High Court ordered the shifting of 13 Indian Premier League (IPL) matches out of the drought-hit west Indian state of Maharashtra, the cash-rich league on Friday picked Bengaluru as the venue for its finale and offered four alternate home options to the state’s affected franchises.  In a meeting between IPL chairman Rajeev Shukla and representatives of Rising Pune Supergiants and Mumbai Indians, it was decided to allot IPL’s final and the first qualifier to Bengaluru. IPL 2016 Schedule, Time Table, Fixture PDF Download

The second qualifier and the eliminator, on the other hand, have been proposed to be moved to Kolkata to implement the Bombay High Court’s order that asked the Board of Control for Cricket in India (BCCI) to shift all the IPL matches after April 30 from Maharashtra due to the acute water crisis in the state.

In Friday’s meeting, the two affected franchises were asked to pick from Raipur, Jaipur, Visakhapatnam and Kanpur as their alternate home base. While Pune opted for Visakhapatnam, Mumbai Indians sought two days’ time to choose their new base.

“We will propose before the governing council that final and qualifier 1 be shifted to Bengaluru, while qualifier 2 and eliminator to Kolkata,” Shukla told reporters after the meeting. “After speaking to the franchises, we have given them four options: Raipur, Jaipur, Kanpur and Visakhapatnam. Mumbai Indians have asked for time till Sunday (to give their preference),” he added. “Pune has given Visakhapatnam as its preference. We will put the proposal of the Pune team before the governing council.”

The logistical crisis was triggered despite the BCCI’s assurance to the High Court (HC) that IPL franchises of Mumbai and Pune had agreed to contribute INR 5 crore each to the Chief Minister’s drought relief fund. “As far as giving INR five crore is concerned, it will be as per the directive of the High Court. They (the franchises) are supposed to get a written order on this,” Shukla said.

Shukla also stated that the BCCI will plead before the HC to allow the May 1 clash between Mumbai and Pune to go ahead in Pune as the home franchise will be playing a game in the city on April 29. “We will request the honourable court to allow us to hold this match,” he said.

The Rajasthan Cricket Association has been banned by the BCCI for factionalism but Shukla said, the venue will be available for IPL as the offer to host has come from the state government.

The BCCI had reacted sharply to the court’s order on Wednesday, saying that it would not be easy to move matches midway into the tournament. Mumbai, Pune and Nagpur were the three venues in Maharashtra holding IPL matches before a public interest litigation was filed, alleging wastage of water in maintenance of pitches.

The BCCI had asserted that it was not using potable water for ground maintenance and offered to supply water to the drought-affected areas. Shukla had gone to the extent of stating that the board could not have done anything more than this.

However, taking a contrary view, Kings XI Punjab co-owner Ness Wadia, who was among the first to advocate shifting of matches, had welcomed the court order, saying that he was glad that sensitivities of the drought-affected people in Maharashtra were being respected.

BCCI secretary Anurag Thakur had said that there was an attempt to create negativity around the league. “We are not using drinking water, we have said that we’ll use treated sewage water only. How many swimming pools of five-star hotels have been shut? Have people stopped watering their lawns,” Thakur had asked.

“There is an attempt to create negativity on every issue these days. IPL was to use 0.00038 per cent of water so that shows the requirement was not much.” The sentiment had found support from former captains Rahul Dravid and Sunil Gavaskar as well, both of whom felt that IPL and cricket had become soft targets to generate controversies. 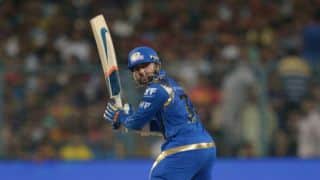