Tim Cook, who is touring India, came at Kanpur this evening on the invitation from IPL chairman Rajeev Shukla.

Kanpur: Apple Inc CEO Tim Cook today got a taste of the IPL cricket tournament during the match between Gujarat Lions and Kolkata Knight Riders here today. Cook, who is touring India, came here this evening on the invitation from IPL chairman Rajeev Shukla. “I had personally invited Cook to watch an IPL match and I am glad that he has accepted my invitation,” Shukla told PTI. Cook was seen enjoying the game while sitting alongside Shukla and Sanjay Dutt, who was recently released from prison. LIVE CRICKET SCORECARD: Gujarat Lions vs Kolkata Knight Riders, IPL 2016 Match 51 at Kanpur

The Apple CEO is on a four-day visit to India where he is expected to meet a host of political leaders, industrialists and celebrities. The 55-year-old Cook landed in Mumbai and paid a visit to the famous Siddhivinayak Temple. Last night, he had also dropped in at a private party organised by Bollywood superstar Shah Rukh Khan, who is also the owner of Kolkata Knight Riders. A lot of excitement was evident at the Green Park Stadium which hosted an IPL game for the first time. It was also the first time that a game was played under lights here. IPL 2016: Apple CEO Tim Cook to watch Gujarat Lions vs Kolkata Knight Riders tie at Kanpur

Talking of the earlier matches of these two teams who are clashing today, GL lost their previous tie to Royal Challengers Bangalore (RCB) by a massive margin of 144 runs as RCB posted a mammoth total of 248, while GL were bundled for mere 104 in pursuit of the chase. The humongous defeat took a toll on their run rate. KKR, on the other hand, were handed a loss in their previous tie against the very same team, as RCB steered to a comfortable 9-wicket win over the hosts, despite the hosts putting up a decent and challenging total of 183 on the board. 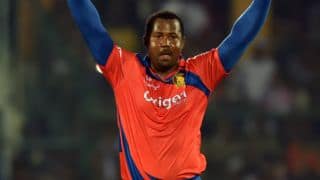