Suresh Raina-led Lions are currently very confident sitting atop the table while KXIP are struggling at the bottom.

Catch the live cricket scores and live cricket streaming of the 28th match in the Indian Premier League (IPL) 2016 tournament, between Gujarat Lions (GL) and Kings XI Punjab (KXIP) at the Saurashtra Cricket Association Stadium, Rajkot. Suresh Raina-led Lions are currently very confident sitting atop the table while KXIP are struggling at the bottom. While it looks to be an easy affair for Raina’s boys, who have won six of their seven matches so far, the kings will have to strive hard to get back to winning note, looking at the fact that the team is gping through plenty of changes. FULL CRICKET SCORECARD: Gujarat Lions vs Kings XI Punjab, IPL 2016 at Rajkot

New Zealand swashbuckler Brendon McCullum and West Indian Dwayne Smith have been key to Lions’ success as they have given superb starts at the top of the order. The two notched up 110 runs in first 10 overs in a match against Delhi Daredevils, a team whose bowling is considered to be among the strongest in the tournament.

The two teams will lock horns for a second time in the tournament. In the first game played at Mohali, Lions had won by 5 wickets. Punjab have only two points from six games, their only win coming against Rising Pune Supergiants. Their big names such as Glenn Maxwell and skipper David Miller have failed miserably so far. But this time, the Kings will be led by Murali Vijay. Miller has managed to score only 76 runs in 6 matches, while Maxwell has a mere 95 from six games to show for. Openers Murali Vijay and Manan Vohra, however, have contributed well with the bat making 143 and 161 respectively in six matches, reported PTI. 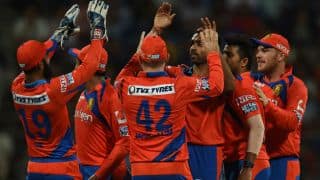