KKR team will be led by Gautam Gambhir whereas Murali Vijay will call the shots for KXIP.

Catch the live cricket scores and live cricket streaming of the 32nd match in the Indian Premier League (IPL) 2016 tournament, between the Kolkata Knight Riders (KKR) vs Kings XI Punjab (KXIP). For live streaming the match, fans can long on to starsports.com, while hotststar.com can be used for online streaming. The match will be broadcast live on a few channels— Sony ESPN, Sony ESPN HD, SET PIX and SET MAX. The live updates of the match are available at CricketCountry. The match is anticipated to be one of the most exciting encounters of the tournament. Live Cricket Scorecard:Kolkata Knight Riders vs Kings XI Punjab, IPL 2016 Match 32 at Eden Gardens

KXIP are at the bottom of the points table in the current standings. Having played seven games, they were able to win only two. KKR, on the other hand have emerged as one of the best teams in this ninth edition of IPL. They are at third position with 10 points from eight clashes. They won five and lost three games. KKR have a net run rate of +0.362. KKR team will be led by Gautam Gambhir whereas Murali Vijay will call the shots for KXIP. Gambhir would want to bat well and lead his team from the front. Kolkata Knight Riders vs Kings XI Punjab, IPL 2016 Match 32 at Eden Gardens, Preview: Mighty KKR take on struggling KXIP

Vijay’s side has a lot to prove in the tournament. They have not played to their full potential, and would certainly want to come up with a better performance in today’s clash. They need to be sanguine and back themselves while facing an in-form team like KKR. 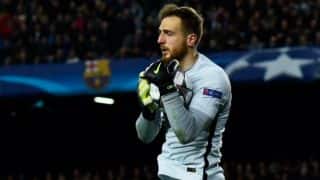 Jan Oblak: Was lucky to save Thomas Muller's penalty