Gujarat Lions will be hosting Kolkata Knight Riders for Match 51 of IPL 2016 at Kanpur on Thursday.

IPL 2016 is approaching it’s end with just few group matches on hand and the following week will witness Playoffs, which will be deciding matches. Now the online tickets for Qualifier 2 and Eliminator can be purchased on iplt20.com from May 19 i.e. Thursday from 20:00 pm. Since the IPL matches are shifted to different locations due to Maharashtra drought, now the eliminators, qualifiers and final will be played at Delhi and Bengaluru respectively. Initially, the matches were to be held at Pune, Delhi and Mumbai.  As for scenario of the match, IPL has reached at an interesting stage. With 16 points under their belt, Sunrisers Hyderabad (SRH) are the only team who are close to booking a place in the playoffs of IPL 9. LIVE CRICKET SCORECARD: Gujarat Lions vs Kolkata Knight Riders, IPL 2016, Match 51 at Kanpur

Last night, Virat Kohli‘s Royal Challengers Bangalore (RCB) put up a stellar performance by demolishing Kings XI Punjab (KXIP) to jump to No. 2 spot in the points table. They have been in an upward for the last few games and are itching to enter the penultimate stage of this T20 domestic extravaganza. Both RCB and Mumbai Indians (MI) have same number of points and still have a game to play. However, MI’s net run-rate will eventually put them in a spot of bother. Apart from these, Kolkata Knight Riders (KKR) are just a game away to secure their spot in Playoffs. As for Delhi Daredevils (DD), they need to win every game here on if they want to make their entrance first time in IPL Playoffs.

While Gujarat Lions (GL) who were reigning at the top are now in do or die situation to stay in the league. Good news is, skipper Suresh Raina will be coming back for the KKR match on Thursday as he was away for delivery of his first child. 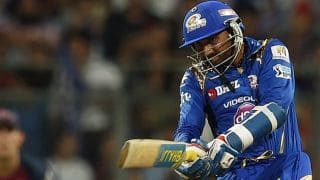