Pune and Rajkot have won the bids for the two new Indian Premier League (IPL) teams that will be replacing the suspended franchises Chennai Super Kings (CSK) and Rajasthan Royals (RR) in the next upcoming two editions of the Twenty20 tournament. While Sanjiv Goenka, chairman of RP-Sanjiv Goenka Group will own the Pune-based franchise, Intex Technologies India Limited bagged the Rajkot team. CSK and RR were suspended by Supreme Court earlier in the year as their respective owners were found guilty of betting in the famous T20 tournament. The two teams will be terminated once Chennai Super Kings and Rajasthan Royals have served their two-year bans.

It was expected that Chennai will continue to have a franchise in the IPL, but it turned out that Pune will be back in the cash-rich tournament once again. It was reported on Tuesday that the bid for Rajasthan was won by the Intex Group for Rs -10 crore while the Pune team bid was won by the RP-Sanjiv Goenka for Rs -16 crore. ALSO READ: IPL 2016: Star India, Chettinad Cement bid for 2 new teams

It was reported earlier in October 2015 that the Board of Control for Cricket in India (BCCI) was mulling over the idea to have reverse bidding for the two new IPL franchises. The bidders, according to this system, could quote lesser than what the BCCI had set as the base price. The lowest bidders for the two franchises will be given the rights to have a team, and the Indian cricket board will pay the winning party the bid amount that would help them to manage the operational costs.

If the bidders quote in negative, the party will then have to pay that amount in negative to the BCCI. This was pushed by the Indian cricket board keeping in mind that with this method, it will be able to attract more bidders who would not mind spending money for only two years, as CSK and RR will return to the IPL once they have served their bans.

The BCCI had put a base price of Rs 40 crores for the two teams. Since Sanjiv Goenka, chairman of RP-Sanjiv Goenka Group had bid Rs -10 crore, he will be paying that amount to the Indian cricket board for owing the Pune-based franchise. At the same time, Intex Technologies India Limited will pay Rs -16 crore to the BCCI after they bagged the Rajkot team. 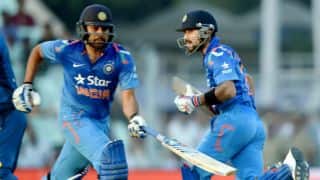