Rajat Bhatia also said no team can be judged at this moment.

New Delhi: They are placed a lowly sixth on the points table but injury-struck Rising Pune Supergiants all-rounder Rajat Bhatia says it’s still early to write off his team as he believes the replacement players will lend much-needed stability to the side. Grappling with injuries to key players such as Faf Du Plessis, Kevin Pietersen, Mitchell Marsh and Steve Smith, the Mahendra Singh Dhoni-led side has managed to win only two of its eight games so far. Full Cricket Scorecard: Delhi Daredevils  vs  Rising Pune Supergiants , 33rd T20 Match, IPL 2016

As they gear up to take on hosts Delhi Daredevils, Bhatia said, they have “nothing to lose” in tomorrow’s game. “You never know. Some teams who are winning might lose and teams that are losing may win. You can’t judge any team at this stage of the tournament. In T20 cricket, it can change any time. It’s all about momentum,” Bhatia said at a press conference. “We now have Usman Khawaja and George Bailey in the side, coming in as replacements. Hope it (combination) works now.” Live Cricket Scorecard:Kolkata Knight Riders vs Kings XI Punjab, IPL 2016 Match 32 at Eden Gardens

Bhatia, who has played Ranji cricket for Delhi, said no side can do much if the players get injured but it gives chance to other players to showcase their talent. “Injuries are unavoidable. We can only do our best. It’s a big squad and everybody gets opportunity. Let’s hope for the best,” he said. Asked if the team’s strategy would be moulded according to the new players coming in, Bhatia said it won’t make much of a difference. “There is no strategy. When you win people say, the strategy has worked. But it is about momentum.” IPL 2016: MS Dhoni gives credit to Rajat Bhatia in Rising Pune Supergiants’ first win in IPL 9 against Mumbai Indians

Bhatia also said that skipper MS Dhoni was still keeping a cool demeanour and that is remarkable. “Nobody knows what is going on in his mind. His thinking is completely different. He is unbelievable. Even when you are expecting that he will be angry, he does not get angry. That’s what I am learning from him. How to stay calm.” Since he has played a lot at the Feroz Kotla ground and is familiar with the conditions, will it help RPS in tomorrow’s game? “You can just share your views, which I am going to do. Wickets and Associations keep changing in Delhi.” 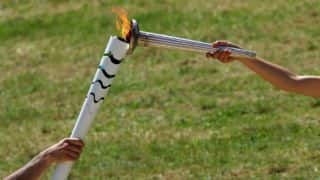