IPL 2016: Shaun Marsh ruled out of IPL 9 for KXIP due to back injury

IPL 2016: Shaun Marsh ruled out of IPL 9 for KXIP due to back injury

Left-handed opener Shaun Marsh is suffering from a back injury and will not take any further part for Kings XI Punjab in Indian Premier League 2016.

New Delhi: Left-handed opener Shaun Marsh today joined the long list of Australian cricketers, who all have pulled out of the cash-rich Indian Premier League tournament. The 32-year-old veteran is suffering from a back injury and will not take any further part for Kings XI Punjab in the cash-rich league as he joins his younger brother Mitchell Marsh (side strain), national captain Steve Smith (wrist) and pacer John Hastings (ankle), who have been ruled out of the tourney. Steven Smith ruled out of IPL 2016 due to wrist injury

According to Cricket Australia’s official website, Marsh has been carrying a niggle since April 19 game against KKR in which he scored 56. “Unlike brother Mitchell and Smith, Marsh is not part of Australia’s squad for the upcoming tour of the West Indies. If selected, his next international assignment will be Australia’s tour of Sri Lanka in July and August,” the CA website stated.

In the six matches for KXIP, Marsh has scored 159 runs at 31.80 the highest average for the franchise. The other overseas IPL injury casualties are Kevin Pietersen (calf), Faf du Pluessis (finger), Lasith Malinga (knees), and Samuel Badree (shoulder).

Rising Pune Supergiants (RPS) batsman and Australian skipper Steven Smith had also been ruled out of Indian Premier League (IPL) 2016 due to a wrist injury. Smith has been in excellent form of late for RPS. He registered his maiden T20 century on Wednesday and has already scored 270 runs  in the tournament so far. 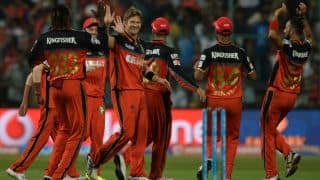