Not revealing names, the former Indian captain and opener Sunil Gavaskar has expressed his disappointment that aggressive players often get away with careless play, since their image in the public eye is of an aggressor. Gavaskar, who recently received a hefty cheque of Rs 90 lakhs for his commentary stint with the Indian cricket board, praised the defending champions Mumbai Indians (MI) for their decision to rope in Jos Buttler, one of the most aggressive batsmen in T20 cricket. Mumbai Indians will take on Kings XI Punjab (KXIP) in the 43rd game of the Indian Premier League (IPL) 2016, on Friday night, at Visakhapatnam. ALSO READ: Virat Kohli should not be rushed into captaincy in all formats of cricket, says Sunil Gavaskar

He was also in full praise for the West Indian hard-hitter, Kieron Pollard, who was keen to make up for the expensive over that he had bowled that gave RCB some momentum in the end of their innings. He looked in complete control of his innings and batted with cool and calculated risks. According to the Times of India, Mumbai, Sunil Gavaskar is not so worried with a rare failure of Rohit Sharma while chasing as his side has a lot of depth and was put to test before the playoffs. He was impressed with the opportunities thrown at Krunal Pandya who has delivered regularly with both bat and ball but hopes he will not make the same mistake as his younger brother, Hardik Pandya in looking too far ahead than home to lose his place in the side.

He believes that the race for the playoffs have tightened with Mumbai winning against the RCB. On the other hand, he praised bottom-ranked Kings XI Punjab’s new-captain, Murali Vijay, as he is playing superbly but lacks the support of other players to win from here on.“Kings XI has been out of sorts with their star players not delivering when needed. In fact, the impression from a distance that some of them are not even giving it their best may be misleading for no player likes to fail, but at the same time, some players feel once they have made it to their national teams that the performance in the IPL will not impact their places in the national team and so tend to play a bit carelessly”, he added further.

Gavaskar concluded by picking Mumbai Indians as their favorites against Kings XI Punjab as they are playing at home and currently have momentum with them. 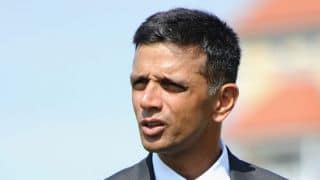 Rahul Dravid paid Rs 2.62 crores as India A and Under-19 teams' coach by BCCI Jasprit Bumrah: Enjoy challenges thrown at me by MS Dhoni