While Virat Kohli is known to be fond of the youngster, the decision came as a shock to many.

Indian Premier League (IPL) has been a place where raw talents capture the attention of global viewers and that was the case with Royal Challengers Bangalore‘s (RCB) Sarfaraz Khan. After his blistering performance in last season’s rain-washed match, Sarfaraz got into the season nine of the Twenty20 (T20) affair with the same finesse, scoring a crucial 35 off 15. But the player was dropped from the side for their last three matches. While Virat Kohli is known to be fond of the youngster, the decision came as a shock to many. However, the skipper has now come up with the reasons of not including the player in the playing XI. FULL CRICKET SCORECARD: Kings XI Punjab vs Royal Challengers Bangalore, IPL 2016 at Mohali

Kohli, as Mumbai Mirror reported, has named his lack of on-field fitness as the reason behind the decision. “He (Sarfaraz) understands the areas in which he needs to work on as far as the fitness and fielding part is concerned. You can’t afford to have too many guys in the field who are not up to the mark with their fielding because the outfield here is lightning quick,” the player was quoted saying. READ: Virat Kohli recommends Daniel Vettori’s name for India’s national coach: Reports

“I think Sachin (Baby) is in that aspect is very committed and he is fit and he works on those things. Me as captain, I want to have a guy who gives 120 per cent on the field and saves some crucial five to six runs. Also, we understand the position Sarfaraz plays, he is going to get 10 to 15 balls to play,” he added. Kohli’s RCB will next face a Murali Vijay-led Kings XI Punjab (KXIP) at Mohali on Monday. 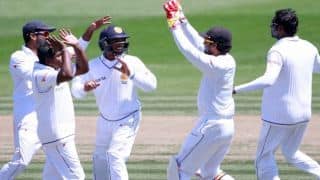