Just a few hours before Royal Challengers Bangalore‘s (RCB) game versus Gujarat Lions (GL), Virat Kohli‘s camp has received a major jolt with AB de Villiers set to miss out due to injury. De Villiers also missed the first two games for his franchise in the ongoing edition with back injury but came hard in his maiden appearance in Indian Premier League (IPL) 2017 to smash an unbeaten 89 against Kings XI Punjab (KXIP) in Indore. RCB, who are already languishing at the bottom of the points table, will have a tough time replacing the South African. In 5 games, RCB have managed to win only one match against Delhi Daredevils (DD). De Villiers himself announced his omission from Tuesday’s clash against Suresh Raina’s side on his official Twitter handle. FULL CRICKET SCORECARD, Gujarat Lions vs Royal Challengers Bangalore Match 20

Disappointed to be missing the match tonight for RCB, due to injury. Good luck to @imVkohli and the team. Lets go @RCBTweets !!

Kohli-led side has been marred with injuries in IPL 10. The RCB skipper was himself injured and returned to the field against Mumbai Indians (MI). On the other hand, they are already without the services of star players in form of KL Rahul and Sarfaraz Khan. Chris Gayle is most likely to replace de Villiers when RCB take on GL in their home ground. This can be a blessing in disguise for Gayle who has blown hot and cold in the tournament so far.

RCB will have to pull up their socks if they want to remain in contention for a place in the playoffs. After losing the tournament opener against Sunrisers Hyderabad (SRH), they came back against DD but have ended on the wrong side in the next three ties. To make matters worse, they are yet to beat GL in the history of league and will have to spring up a much better performance this time around. 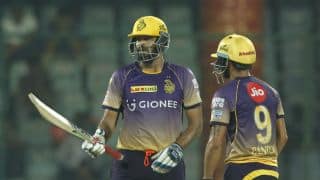