Kolkata Knight Riders scored 65 runs in the powerplay overs, but Gujarat Lions went one step ahead and finished the first six overs with 72 on the board.

Suresh Raina scored a match-winning 46-ball 84 for Gujarat Lions (GL) in their match against Kolkata Knight Riders (KKR) at the Eden Gardens on Friday. Chasing a formidable 188 for a win, GL got off to an excellent start thanks to some explosive hitting from openers Aaron Finch and Brendon McCullum. KKR skipper acknowledged Raina s excellent innings, but felt that the opening stand took the match away from his side. KKR scored 65 runs in the powerplay overs, but GL went one step ahead and finished the first six overs with 72 on the board. Gautam Gambhir at the post match chat mentioned that it was nice to see Raina score runs, but it was a pity it came against his side. FULL CRICKET SCORECARD: Kolkata Knight Riders vs Gujarat Lions Match 23

I thought we batted really well. 188 was a really good total, but they took the game away from us in the first six overs. For the kind of bowling we have, I thought we had enough runs on the board. The way Finch and Baz [McCullum] batted, they took the game away. The wicket was still a bit sticky in the first innings, we knew that it would get better in the second innings, Gambhir said.

Whoever plays against Gujarat would want to chase because they are a batting-heavy side. They were far more professional than us tonight. He [Raina] is a quality player and they are a quality side as well. It is always good to see him [Raina] get runs, but obviously not against us, Gambhir joked.

Despite this loss, KKR remain second in the IPL 2017 table with eight points, while GL move to four points from six games, but lie in seventh position. 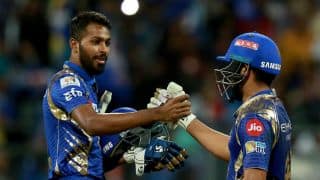 IPL 2017: Was a do or die game for us, says Suresh Raina after Gujarat Lions’ (GL) win over Kolkata Knight Riders (KKR)