IPL 2017: As long as MS Dhoni was at the crease, we knew Rising Pune Supergiant would win, says Shikhar Dhawan

IPL 2017: As long as MS Dhoni was at the crease, we knew Rising Pune Supergiant would win, says Shikhar Dh

SRH started off very slowly, but Shikhar Dhawan believes that his side had done well to recover and eventually posted a good total.

MS Dhoni was the star for Rising Pune Supergiant (RPS) as his last-ball heroics ensured that they won the match by 6 wickets against defending champions Sunrisers Hyderabad (SRH). Dhoni finished unbeaten on 61 off 34, which included five fours and three sixes in the Indian Premier League (IPL) 2017 game on Saturday. SRH opener Shikhar Dhawan said that he believed that as long as Dhoni was at the crease, RPS would go on to win. SRH had set RPS a target of 177, thanks to a brilliant 55 not out off 28 from Moises Henriques. David Warner and Dhawan chipped in with 43 and 30 respectively. Deepak Hooda too came in at the latter stages and smashed his way to a 10-ball 19 not out. FULL CRICKET SCORECARD: RPS vs SRH , IPL 2017 Match 24

On Dhoni s heroics, Dhawan in the post match press conference said, Dhoni is an experienced player. He has won games for his team from a tough situation for years. We knew that as long as he was there, RPS would win. The two catches we dropped proved costly in the beginning and then Dhoni s catch eventually cost us the game. Still, I believe that our bowlers bowled well Siddharth [Kaul], Bhuvi [Bhuvneshwar Kumar], and Siraj. Unfortunately, both catches were dropped off Siraj s bowling. If we had taken those catches, the result of the match could have been different. But that s part and parcel of the game, according to iplt20.com. IPL 2017: MS Dhoni, Rahul Tripathi fire RPS to 6-wicket win over SRH in IPL 10, Match 24

SRH started off very slowly, but Dhawan believes that his side had done well to recover and eventually posted a good total. The score that we had in the first 12 to 13 overs, we felt that we were about 10 to 15 runs behind. But the way we made up for it was really good. I felt that it was a god score, Dhawan said.

Commenting about the match, Dhawan said, It s always exciting and the heartbeat increases in such close games. But we knew that if Dhoni was there RPS would win. He has done that so many times. Subconsciously, we trust him to do it again. 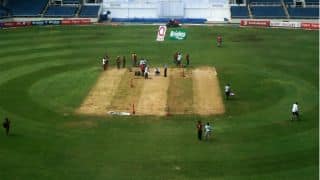