In match 11, between Kolkata Knight Riders (KKR) and Kings XI Punjab (KXIP), we saw batsmen run fours, while there were run out attempts at both the ends.

Indian Premier League (IPL) often produces surprising episodes. Be it comedy of errors or unprecedented events, this T20 league does not fail to entertain its audience. In match 11, between Kolkata Knight Riders (KKR) and Kings XI Punjab (KXIP), we saw batsmen run fours, while there were run out attempts at both the ends. Agreed that Eden Gardens is a big ground, but not big enough for a batsman to sprint and amass that many runs in an era that generates top-drawer fielders. Then, how did this happen, you ask? Was there an overthrow? Or, did the fielders doze off? Maybe, both things can be taken into consideration here. FULL CRICKET SCORECARD: Kolkata Knight Riders (KKR) vs Kings XI Punjab (KXIP), IPL 2017, Match 11

Trent Boult bowled the last ball of the 19th over to Mohit Sharma who guided the ball in the deep. Umesh Yadav was quick enough to induce a direct-hit, but Mohit had already made it to the crease. The ball ricocheted off to fine-leg who threw it at the non-striker’s end to dismiss Varun Aaron who, too, made it to the crease. The comedy of errors helped KXIP run four runs off one ball, while the LED wickets at both the ends were flashing as the respective fielders were spot-on with their throws.

KKR, however, have not been having a good day in the field. Sunil Narine dropped Manan Vohra at third-man. Vohra scythed a short and wide delivery but could not guide it where he wanted to. He instead gave a simple catch to Narine who eventually dropped.

Wicketkeeper Robin Uthappa faced a similar fate. He dropped an inside edge off Glenn Maxwell. For that matter, it was KKR’s fielding that had cost them the match against Mumbai Indians at Wankhede Stadium. 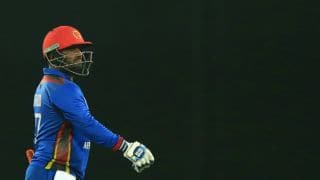