Virat Kohli, who will miss a few matches of IPL due to shoulder injury, joined RCB camp on Monday.

Virat Kohli, who will miss a few matches of Indian Premier League (IPL) due to shoulder injury, joined Royal Challengers Bangalore (RCB) camp on Monday. However, reports say that all-rounder Shane Watson will lead the side in his absence albeit AB de Villiers was named stand-in captain, but he too joined the list of casualties. Be that as it may, it is good to see Kohli having a good time with his RCB teammates after a successful yet gruelling home season of Test cricket. In a video shared by RCB on their Instagram account, Kohli was seen getting a rousing reception by his teammates on joining the camp. Also read – Smith records message in Marathi for RPS supporters

In the video, Kohli is first greeted by RCB s latest high-profile signing Tymal Mills. The skipper, after a quick handshake with the fast bowler, proceeds towards his buddy Chris Gayle, who gives him a traditional welcome with a gesture reserved between the two, followed by a hug. Watch it here:

Just in: Skipper @virat.kohli has joined the Royal Challengers in Bangalore for the #VIVOIPL2017! #PlayBold

A post shared by Royal Challengers Bangalore (@royalchallengersbangalore) on Apr 2, 2017 at 6:46am PDT

Kohli himself had shared a video, saying the rehab is going well and training hard to be in full fitness. Kohli was the holder of Orange Cap last season, scoring 973 runs at 81.8. As a matter of fact, Kohli did not have any hundred in the shortest format until the previous edition, but ended up being the only player to score four hundreds in a season. Hence, the injury-hit RCB will hope their captain recovers soon and partners Gayle at the top of the batting order.

Given Kohli will captain India in ICC Champions Trophy 2017, Kohli will not take slightest of risk. He instead will spend more time on his rehab and make sure he is the pink of his fitness before ICC’s flagship tournament.

RCB will take on defending champions Sunrisers Hyderabad in the opener of IPL 2017 at Hyderabad. 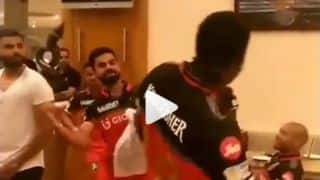