By the time of filing this report, the Lynn-Gambhir pair had added 150 runs in just the 13th over. Asking Lynn to open the innings has certainly proved to be a masterstroke for KKR.

Kolkata Knight Riders (KKR) skipper Gautam Gambhir and Chris Lynn made mockery of Gujarat Lions (GL) bowling attack in their opening match in the 10th season of Indian Premier League (IPL) at Rajkot on Friday. Chasing the target of 184, the opening pair made short work of it by putting up a 100-run opening stand in no time. Both the players raced to their respective fifties in virtually no time, putting KKR in the pole position. While Lynn took just 19 balls to get to the landmark, Gambhir took 33 balls to get to his milestone. In the end, they remained unbeaten as Kolkata beat Gujarat by 10 wickets with more than 5 overs to spare. Lynn scored 93(41)* while Gambhir put up 76(48*).

Both the batsmen were in no mood to allow Gujarat bowlers to settle down. While Lynn, who has a reputation of being a big-hitting batsman in Australia s domestic T20 tournament Big Bash League (BBL), played the aggressor s role from the beginning, Gambhir was calmer of the two in the middle. Lynn, the player of BBL for 2016 as well as 2017, struck 4 fours and 5 sixes to get to his fifty. Gambhir on the other hand hit 8 boundaries to complete his record-32nd fifty in IPL. The duo also brought up the highest opening stand for KKR as well as in the history of IPL in the process. Here s how the Twitterati reacted to the duo s power hitting:

Highest opening stand in IPL between Lynn and Gambhir, going past 167 b/w Gayle and Dilshan v PWI in 2013. #GLvKKR

KKR making a mockery of the Gujarat Lions’ total. How well has Gambhir played to match what Lynn has done #KKRvsGL

Asking Lynn to open the innings has certainly proved to be a masterstroke for KKR. Lynn had a fantastic BBL this year, where he scored 309 runs in 5 games at 154.50 and a SR of 177.58. He also hit 26 sixes during Brisbane Heat s campaign. 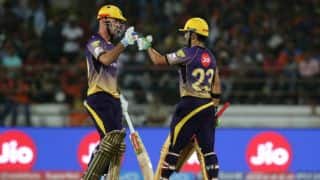 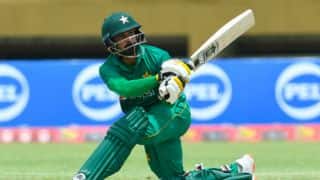