This is the first instance for KXIP since 2013 where they have restricted their opponent under 100.

Delhi Daredevils (DD) were bowled out for a paltry 67 in the 36th match of the 10th edition of Indian Premier League (IPL) against Kings XI Punjab (KXIP) at the Punjab Cricket Association IS Bindra Stadium, Mohali. Playing their eighth match in the tournament, KXIP dismantled DD s batting line-up in the absence of their regular skipper Zaheer Khan. Karun Nair was leading DD in Zaheer s absence. DD s total of 67 is now their lowest in IPL history, joint 3rd-lowest by any team in the tournament and also the lowest against KXIP by a side. Full Cricket Scorecard, KXIP vs DD, Match 36

This is the first instance for KXIP since 2013 where they have restricted their opponent under 100. Previously, they have done it twice. On the first occasion, they bowled out Mumbai Indians for 87 in 2011 and then restricted Pune Warriors to 99 for 9 in 2013. DD’s 67 is now the lowest total at Mohali in IPL. Interestingly, this is the first time when KXIP bowled out their opponent under 100 in first innings of the match. DD s total of 67 is also the joint-lowest total by a team while batting first.

Credit for DD s batting collapse goes to KXIP s pacer Sandeep Sharma, who bowled an excellent spell of 4 overs with four crucial wickets of Sanju Samson, Sam Billings, Shreyas Iyer and Kagiso Rabada. Sandeep conceded only 20 from his spell and this was second four-for in IPL. Besides Sandeep, Akshar Patel and Varun Aaron picked two wickets, while skipper Glenn Maxwell and Mohit Sharma scalped one each. 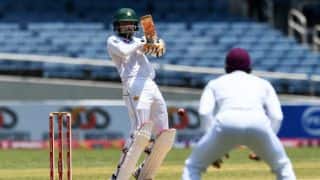