Sehwag also praised Dhoni s performance against England in ODI series, adding that the 35-year-old is pretty much in form and added that an Indian side without Dhoni in the Champions Trophy 2017 should not be expected at all.

Former Indian captain MS Dhoni is not having a great time with the bat in the ongoing season of the Indian Premier League (IPL). In the four matches he has played for Rising Pune Supergiant (RPS) so far in IPL 2017, Dhoni has scored only 33 runs 12 not out, 5, 11 and 5; with the latest knock coming against Gujarat Lions (GL) in Rajkot on Friday. With the runs from his willow drying up, his detractors gained voice, with some of them even trending #DhoniDropped on Twitter earlier in the day. The social media platform was flooded with tweets criticising the wicketkeeper-batsman s poor form.

However, just as his detractors raised their voice, his legion of fans came to his rescue, setting the social media abuzz with the trend #WeStandByDhoni. In fact, not just his fans, but former cricketer Virender Sehwag also jumped to Dhoni s defence. Sehwag, who was Dhoni s teammate for 7-8 years, emphasised that the position at which Dhoni bats is a difficult one and people need to be patient as he would return to form with authority.

The position at which he s coming in to bat is very difficult. He is still the best at No. 5 or No. 6, said Sehwag while talking to ABP News. There s no doubt that he will be back in form sooner rather than later. There s a lot of time left in the IPL. One should not judge a player of Dhoni s stature just by the outcome of three-four games.

Sehwag also praised Dhoni s performance against England in ODI series, adding that the 35-year-old is pretty much in form and added that an Indian side without Dhoni in the Champions Trophy 2017 should not be expected at all.

He recently scored a match-winning hundred against England. So I don t think he s out of touch. You can t even imagine an Indian side going to Champion s Trophy without Dhoni. Things like this can happen in a tournament like IPL, he added. IPL should not be a platform to judge an experienced player like Dhoni. It s fine if you judge a youngster on the basis of IPL as it is difficult for a newcomer to showcase his talent in front of a huge crowd.

Earlier, Dhoni was axed from RPS captaincy with Steven Smith taking over. The decision was taken considering RPS poor performance in last IPL, where they finished 6th. That, however, has not changed the fortunes of the side, as it has lost 3 of the 4 matches being played in this season so far. 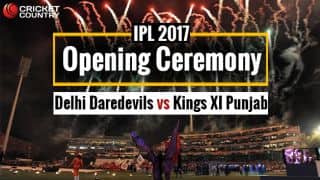