While the ECB's decision to recall Stokes early was criticised by Kevin Pietersen, who is part of the commentary panel in the IPL, Hussain had a different opinion on the matter

Former England captain Nasser Hussain has put his weight behind England and Wales Cricket Board s (ECB) decision to recall Ben Stokes before the start of Indian Premier League (IPL) 2017 playoffs. Stokes, a key part of Rising Pune Supergiant (RPS) side, had to leave IPL 10 after May 14 deadline being set by the ECB for its players to leave IPL and join the national squad in Spain for a preparatory camp ahead of a three-match One-Day International (ODI) Series against South Africa at home. As a result, he had to miss the Qualifier 1 against Mumbai Indians (MI), against whom RPS will play the IPL 2017 final on Sunday. Stokes will miss the final as well.

Stokes was purchased for a whopping INR 14.5 crore by RPS in IPL 2017 player auction. Living up to the price tag as well as the hype, Stokes scored over 300 runs (including a hundred) and picked up 12 wickets in 12 matches he played, thus establishing himself as a vital cog in the RPS unit. However, he had to miss Qualifier 1 as well as final after ECB asked him to return for South Africa ODIs to be played before ICC Champions Trophy 2017. Along with him, Jos Buttler and Chris Woakes were also called up to join the training camp, even as MI and Kolkata Knight Riders (KKR) both made it to the playoffs.

While the ECB’s decision to recall Stokes early was criticised by Kevin Pietersen, who is part of the commentary panel in the IPL, Hussain had a different opinion on the matter. Stating that Stokes was the most sought-after player in the IPL only due to his previous exploits for England, Hussain said Stokes was ought to honour England commitments.

England have risen from the ashes of ICC Cricket World Cup 2015 debacle, and its credit goes to the management comprising of captain Eoin Morgan, coach Trevor Bayliss, his assistant Paul Fabrace and director of English cricket Andrew Strauss. These men have been responsible for picking the right players, backing them to the hilt and building a solid team. Hussain reckoned that any decision taken by these wise men was good for English cricket.

“You could argue put Stokes on a flight to Hyderabad the day before and go and play in the final – he has done the team building so you get the best of both worlds. But for the sake of one game, I’d rather have the England team preparing for the ICC Champions Trophy. Have Bayliss, Fabrace and Strauss made our one-day side better? Have they got many things wrong? On this occasion let’s just say – this is your side; you are doing wonderful things with it. They must have mulled over it, it’s not something that they would just dismiss. They would have sat there and discussed which is better the individual or the team?

“In general those three have made some fabulous decisions with the One-day side. Let’s give them credit to say that it is not ideal to miss a final but it’s important to all be together,” Hussain concluded. 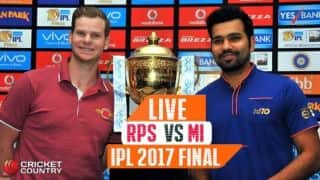