IPL 2017; Kolkata Knight Riders (KKR) coach Jacques Kallis on Friday said that he was expecting Gujarat Lions (GL) to come hard at them.

As Gujarat Lions (GL) came up with an impressive performance to tame the former 2-time champions Kolkata Knight Riders (KKR) by 4 wickets, in Match 23 of the ongoing Indian Premier League (IPL) 2017 at the historic Eden Gardens Stadium in Kolkata on Saturday; Kolkata did had something to worry about post the loss. Meanwhile, Kolkata coach Jacques Kallis on Friday said that he was expecting Gujarat to come hard at them, since they are one of the most dangerous sides in the tournament. He also said that they do possess dangerous players in the side and are tough to be beaten on any track. FULL CRICKET SCORECARD: Kolkata Knight Riders vs Gujarat Lions, IPL 2017, Match 23 at Eden Gardens

“It was certainly not one of our best bowling performances. We would have liked to get 200, especially after the start we had. But I must say that they bowled well, especially in the last five overs. The yorkers fell into place and they kept it tight. All that made it tough for us. So yes, it was disappointing that we didn’t get those 10-15 runs more. We don’t become a bad bowling unit after just one game. We will have some good game plans in place. RCB are down in the table, and they are looking for some form. We will have to use that to our advantage. We still have a lot of confidence,” said Kallis, as reported by IANS.

“The boys are playing with freedom and playing well. We haven’t been able to put up a complete game so far, but when we start doing that we will be a tough side to beat. It just seems to be a trend that sides chasing tend to win more. So I don’t think that’s an issue. We need to up our standards in all the departments, that’s how we see it. When good players get off to a good start, it’s difficult to contain them. Raina played really well to hold the innings together,” he concluded. 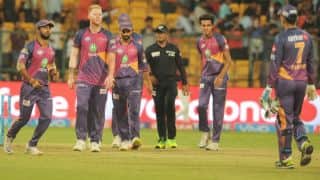 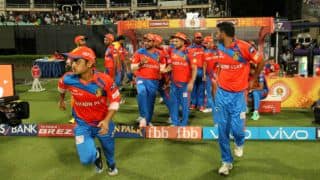