"You know it has been 34 matches I have waited to get my IPL debut so, yeah the way they came out today, I got a few wickets, it couldn't have been better." - Andrew Tye

Match no. 13 of Indian Premier League (IPL) saw Gujarat Lions (GL) hammer Rising Pune Supergiant (RPS) by 7-wickets, that helped them notch up their only win in the tournament so far. More than the victory, the match will be remembered for Andrew Tye‘s hat-trick on IPL debut. Tye recorded figures of 5 for 17 against RPS that included a hat-trick as well; nabbing Ankit Sharma, Manoj Tiwary and finally Shardul Thakur. Tye had earlier picked up a hat-trick in the Australia’s Big Bash League (BBL) 2016-17 as well playing for Perth Scorchers. Tye was unlucky to miss out on his 6th wicket as Ravindra Jadeja dropped a catch in the final over of the match. FULL CRICKET SCORECARD: GL vs RRPS, IPL 2017 Match 13

Speaking about his IPL debut, Tye in an interview to IPLT20.com said, “You know it has been 34 matches I have waited to get my IPL debut so, yeah the way they came out today, I got a few wickets, it couldn’t have been better.”

“We went out there with a certain attitude; that we had to be energetic, had to get things done today. It hadn’t worked for us the last couple of times. The way we started with Praveen Kumar in the first and the catch that Suresh took set the tone,” said Tye on how Lions planned to topple Pune in their third game at home.

Tye also opened up how he got the news of playing in the game, “Yeah it was good, I think the coach Hodgey [Brad Hodge] told me finally this morning that get ready to play. To get that first wicket in my first over really settled me down. I came in here with pretty much nothing to lose.”

On his hat-trick, he said: “Yeah, I actually knew that it was a hat-trick, I had one in the Big Bash earlier this year. It was good, I was happy the way I executed the ball as I wanted to, and was happy how the third ball came out at the stumps. Sometimes you try so hard that it doesn’t go right. 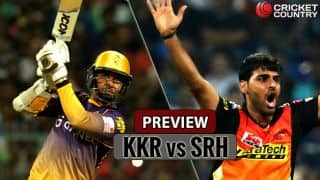