The live cricket streaming of Rising Pune Supergiant (RPS) vs Sunrisers Hyderabad (SRH), IPL 2017, Match 24, will be available on Hotstar.

As the excitement continues to build up, its time for another thriller as Rising Pune Supergiant (RPS) take on the defending champions Sunrisers Hyderabad (SRH), in Match 24 of the ongoing Indian Premier League (IPL) 2017 at the Maharashtra Cricket Association (MCA) Stadium in Pune on Saturday. The live cricket streaming of the match will be available on Hotstar. Also, the live telecast of the match will be available on Sony Six and Sony Six HD in English commentary, along with Hindi, Bengali, Tamil and Telugu commentary on Sony ESPN and Sony ESPN HD, while SET MAX to feature only Hindi commentary. FULL CRICKET SCORECARD: Rising Pune Supergiant vs Sunrisers Hyderabad, IPL 2017, Match 24 at Pune

With one of the strongest bowling attack in the competition, the reigning champions SRH have already become one of the most attractive teams for the season. Rashid Khan has been a wonder boy for the team while Bhuveshwar Kumar has also provided top-notch performances to help the team claim a spot in the top four and maintain it continuously. With their newfound hero in Mohammad Siraj, who made a successful IPL debut in the previous match by taking a couple of wickets, the SRH camp now have plenty of options for the bowling department.

RPS ploy of changing the captaincy from MS Dhoni to Smith has not done much to their performance. The team failed to find the right combination of bowlers in the initial stage of the tournament which cost them matches despite decent display with the bat. However, with Shardul Thakur and Jaydev Unadkat performing well with the ball, RPS seem to have found their handful of pacers. Spin has never been their weak link and Imran Tahir remains to be the most important man for them. 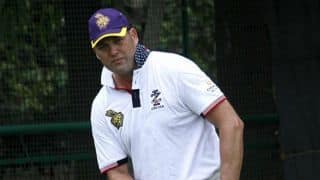