Reigning champions Sunrisers Hyderabad (SRH) are set to face Gujarat Lions (GL) in Match No. 6 of the Indian Premier League (IPL) 2017 on Sunday.

Reigning champions Sunrisers Hyderabad (SRH) are set to face Gujarat Lions (GL) in Match No. 6 of the Indian Premier League (IPL) 2017 on Sunday. The live cricket telecast of all the matches of IPL 2017 will be available on Set Max, Sony Six, Sony Six HD, Sony ESPN and Sony ESPN HD. The live online streaming of all the IPL 2017 matches will be available at ESPN, SonyLIV and Hotstar. To be played at the Rajiv Gandhi International Stadium, Uppal, Hyderabad, it will be the first match of the day as Mumbai Indians (MI) will face Kolkata Knight Riders (KKR) in the second match of the day at the Wankhede Stadium, Mumbai. Live Cricket Scorecard, Sunrisers Hyderabad vs Gujarat Lions Match 6, IPL 2017

SRH will be confident ahead of the match playing in home conditions. Sunrisers Hyderabad have registered their first victory of the season in their first match against last year s runners up Royal Challengers Bangalore (RCB). Led by skipper David Warner, SRH first put up a massive total of 207 for 4 and then went on to restrict a batting-heavy RCB at 172 with 2 balls to spare, snatching a 35-run victory. Both Moises Henriques and Yuvraj Singh scored half-centuries and later Ashish Nehra and Bhuvneshwar Kumar led the bowling attack, picking up 2 wickets each. Another sensational effort came from IPL debutant Rashid Khan, who picked up 2 wickets.

GL lost their first match due to poor bowling. Gujarat Lions started off well, putting up a competitive score of 183 for 4 in their 20 overs. However, Kolkata Knight Riders (KKR) skipper Gautam Gambhir (76*) and fellow opener Chris Lynn (93*) together got their team home, chasing down the target with 5.1 overs still remaining. 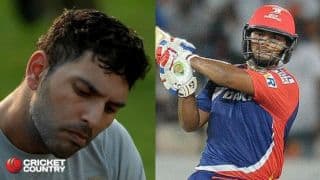