After receiving Man of the Match, Lockie Ferguson spoke about RPS innings and his game plan against AB de Villiers

It was another forgettable evening for Royal Challengers Bangalore (RCB) as they faced a defeat against Rising Pune Supergiant (RPS) by 61 runs in match 34 on IPL 2017. It is a shame as RCB are almost out of the tournament. RCB heavily felt the absence of Chris Gayle and Shane Watson. However, Imran Tahir and Lockie Ferguson defended the RPS total well. Where Tahir ended with figures of 3 for 18, Ferguson not only ended his spell with figures of 4-1-7-2 but also ended up being adjudged Man of the Match. Ferguson’s spell is the joint third-best economical spell in the history of IPL after Nehra and Fidel Edwards. Rahul Sharma also bowled a spell of 4 over where he conceded only 7 runs. His spell read 4-0-7-2 vs MI for PWI in 2011. FULL CRICKET SCORECARD: RPS vs RCB, Match 34

After receiving Man of the Match, Ferguson spoke about RPS innings and his game plan against AB de Villiers, We thought we were 15-20 runs short today, but the start with the ball was very good and it made my job easier. I tried to keep it as simple as possible and bowled the cutters as well. Credit to all the boys as well. I just tried to create some early pressure with AB, fortunately it went straight to Manoj [Tiwary]. RPS were off to a decent start with Steven Smith and Manoj Tiwary anchoring the innings with 45 and unbeaten 44 respectively.

MS Dhoni also helped to push RPS to 157 with his 17-ball 21 that included a four and a six. Chasing 158, nightmares of RCB s collapse against KKR returned as they were 48 for 5 at 9.5 overs. Skipper Virat Kohli was the only batsman to score a fifty while the rest were bundled for single digits. This is the second time they did not manage a three digit score this season. 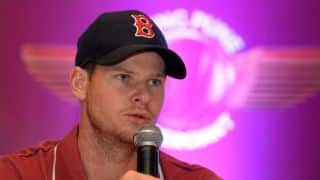