Although Manan Vohra hogged limelight for his 50-ball 95, it was Bhuvneshwar Kumar s five-wicket haul that snatched the victory from KXIP.

Sunrisers Hyderabad (SRH) managed to bag yet another victory, this time by a close margin of 5 runs against Kings XI Punjab (KXIP) in Match 19 of IPL 2017. Although Manan Vohra hogged limelight for his 50-ball 95, it was Bhuvneshwar Kumar s five-wicket haul that snatched the victory from KXIP. SRH s wicketkeeper-batsman Naman Ojha praised Bhuvneshwar s performance. Ojha, who is struggling to prove his calibre in the current edition of IPL, did not receive opportunity to bat in the first 2 matches. Off the three matches he did play, Ojha has scored 54 runs. Ojha who opened for his state Madhya Pradesh in domestic circuit also spoke about his batting position. FULL CRICKET SCORECARD, Gujarat Lions vs Royal Challengers Bangalore Match 20

Speaking to the reporters during the post-match press conference after SRH s victory, Ojha felt the conditions favoured the spinners. He was quoted as saying by iplt20.com, I think it was a slow wicket. The ball was gripping a bit for the spinners. We thought 160 was a good total on this wicket. The game plan was to reach 160 and then defend it. Ojha also spoke on his batting form in IPL 10, First two matches I did not get the opportunity to play. To open the innings…. at No. 7 is difficult for me. I am a top-order batsman for my state. At the beginning of IPL as well, I played in the top-order. But with David Warner and Shikhar Dhawan in the side, I have to bat down the order.

Bhuvneshwar was the driving force for SRH s victory. He not only ended with figures of 5 for 19 but also completed 100 IPL wickets, becoming the sixth Indian to achieve this feat.

Ojha lauded Bhuvneshwar s hard work and added, He is the same as what we saw last year. To maintain the same level, one requires hard work or else the graph starts falling down. I think he has maintained himself very nicely. 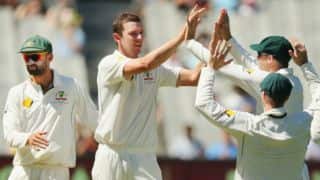