The young turks of DD braved the dicey wicket, where run-scoring got tough as the ball got old, and helped their side get somewhere near par score.

Delhi Daredevils (DD) posted 168 for 7 in their second home game of the season 10 of Indian Premier League (IPL) playing against the Kolkata Knight Riders (KKR) at Feroz Shah Kotla Ground in Delhi on Monday. In Match 18, which is first of the double-header, DD got to the said total due to decent knocks from opener Sanju Samson and wicketkeeper-batsman Rishabh Pant. The young turks of DD braved the dicey wicket, where run-scoring got tough as the ball got old, and helped their side get somewhere near par score. It will now be up to their strong bowling attack to restrict KKR to a lesser total and register their third win in the tournament. FULL CRICKET SCORECARD: Delhi Daredevils (DD) vs Kolkata Knight Riders (KKR), IPL 2017, Match 18

Zaheer Khan won the toss and opted to bat first; a trend that has been his side s recipe to success in this tournament thus far. After losing their first game against Royal Challengers Bangalore (RCB) by 15 runs, DD have played two more games and won them convincingly batting first. They first beat Rising Pune Supergiant (RPS) by a massive margin of 97 runs before crushing Kings XI Punjab (KXIP) by 51 runs: both pretty handsome margins in T20 cricket.

Zaheer s openers made his call look right, as Samson looked brilliant from the word go. The talented youngster, who has had a great start to IPL 10 having scored a ton, collected two boundaries in the first over bowled by Nathan Coulter-Nile. The third over of the innings was even better for DD, as Samson picked up three fours off Umesh Yadav s bowling, while Sam Billings also got one. The two openers, as a matter of fact, kept collecting a boundary off almost every over, bringing up the fifty in the fifth over.

DD raced to 53 at the end of powerplay, but KKR got the first breakthrough immediately after that. Coulter-Nile induced an edge off Billings bat down the leg side, which was pouched by Robin Uthappa. He got 21. In the very next over, Umesh returned to get his man Samson, who perished to a similar dismissal after scoring a fine 39 off 25 balls.

With two new men in, the flow of runs came to a halt. Karun Nair, who has had a torrid time since he scored that triple ton against England last year, struggled to get going today as well. Shreyas Iyer did try to keep adding runs from the other end, but his stay was cut short when a Collin de Grandhomme throw found him short of crease. Iyer scored 17-ball 26. Soon after, Coulter-Nile ended Nair s struggle in the middle when he cleaned up in the 15th over.

However, Iyer s dismissal proved to be a blessing in disguise for DD, as it brought Pant in the middle. The young wicketkeeper-batsman added quickruns. He was particularly severe against India s pace spearhead Umesh, whom he hit for 26 runs in an over, which had 3 sixes and 2 fours.

Pant was eventually dismissed by Coulter-Nile for 16-ball 38; a knock that had 2 fours and 4 sixes. Angelo Mathews, who made a return to cricket after an injury layoff, was dismissed for 1, when he charged to hit a Narine delivery out of the park but missed it completely.

Chris Morris, who was lucky to survive two dropped catches in a Coulter-Nile over, then guided the total to 168 along with Pat Cummins.

For KKR, Coulter-Nile was the pick of the bowlers, ending his quota of four overs with figures of 3 for 22. He could have had 5 instead, with Morris surviving twice off his bowling and Cummins on one occasion, when the ball hit the stumps but the bails did not come off. Narine was cost-effective as usual, while Chris Woakes too kept things tight. Umesh proved costly, conceding 53 runs off his spell.

Earlier, DD made two changes to their squad, bringing in Mohammed Shami in place of Shahbaz Nadeem and Mathews for Corey Anderson, who was unwell. KKR made a single change, bringing in Coulter-Nile for Trent Boult. 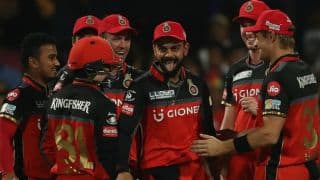