RPS have a plethora of international skippers like MS Dhoni, Faf du Plessis and Ajinkya Rahane to help Steven Smith out in pressure conditions.

Indian Premier League (IPL) newbies Rising Pune Supergiant (RPS) have made quite a name for themselves in the media space. From changing their name to sacking captain MS Dhoni, the RPS side has done it all. Pune-based franchise RPS have changed their name from Rising Pune Supergiants to ‘giant’ in a bid to forget painful and unforgettable memories from their inaugural season in IPL 9, where they ended at No. 7. Their first season was also marred by injuries to key players that hampered their chances. Even before IPL 2017, RPS apologetically changed their skipper from Dhoni to Steven Smith with much fanfare. During the IPL 2017 Auction, they went all out to snatch England all-rounder Ben Stokes for a monstrous INR 14.5 crores, making him the most priced overseas acquisition ever in the history of IPL. Furthermore, even before their season commenced, an injury to key player Mitchell Marsh made them worry in their socks. IPL 2017: Experience to play on IND wickets will help GL, feels Munaf

RPS have a plethora of international skippers like Dhoni, Faf du Plessis and Ajinkya Rahane to help Smith out in pressure conditions. They boast of a good pool of domestic talent in Manoj Tiwary, Shardul Thakur, Jaydev Unadkat, Ashoke Dinda and Rajat Bhatia to acquire services of.

The Supergiant will be coached by Stephen Fleming, while Hrishikesh Kanitkar will act as an assistant coach. Eric Simmons will be their bowling coach.

RPS are owned by RPSG Group (RP-Sanjiv Goenka Group), chaired by Sanjiv Goenka. Goenka announced Rahgu Iyer to take over as CEO in January 2016. RPS are scheduled to play all their home games at Maharashtra Cricket Association (MCA) Stadium in Pune. 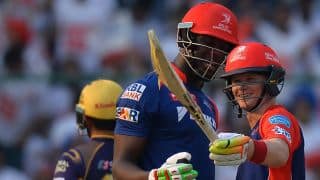