Jacques Kallis rung the Eden bell ahead of match 14, between Kolkata Knight Riders (KKR) and Sunrisers Hyderabad (SRH), of Indian Premier League (IPL) 2017. In came mystery spinner Sunil Narine to open with his captain Gautam Gambhir, after David Warner invited the home team to bat first. In the last match, Narine had taken everyone aback with his 18-ball 37 against a new ball. This time, however, he could not emulate his magic with the bat, managing 6 off 9. For that matter, he was facing a top-notch bowling unit, which had restricted the batting-heavy KKR to 40 for 2 after after batting powerplay. But Robin Uthappa turned back the time and swatted sixes off his trademark front-foot trigger movement, taking KKR to 172 for 6. LIVE CRICKET SCORECARD: Kolkata Knight Riders (KKR) vs Sunrisers Hyderabad (SRH) Match 14 at Kolkata

The relaid track had even bounce, but the ball seemed have come slower on the bat than expected. Uthappa hit the ball with ease off the pacers and, when spinners tossed the ball up, the batsmen faced trouble putting it away. SRH pacers were smart to spot that. They coupled cutters with back-of-the-hand deliveries, taking pace of the ball.

Bhuvneshwar Kumar, the Purple Cap holder, proved his supremacy. He gave away only 7 runs off his first 2 overs, taking an important wicket of Narine. Bhuvneshwar did not allow Narine to open his arms by coming around the wicket. The ploy paid off and Bhuvneshwar had Narine clean-bowled with a peach of a yorker.

After a two-over spell each for Bhuvneshwar and Nehra, Warner introduced the medium pacer Ben Cutting and leg-spinner Rashid Khan to bowl the last two overs of batting powerplay. Uthappa and Gambhir collected a boundary each off Cutting. Uthappa then became the first batsman to hit a six off Rashid, but Gambhir, in the same over, failed to connect Rashid’s flipper and joined Narine in the dugout.

KKR did not have enough runs on the scoreboard when Uthappa and Manish Pandey partnered. Cutting and Rashid bowled well in tandem giving no boundary off the first two overs after the powerplay, and that is when Uthappa decided to go full throttle. He targetted Moises Henriques and Bipul Sharma, and bagged two sixes.

After 11 overs, KKR had 4 fours and as many sixes.

KKR had their plan dished out. Uthappa will drop the anchor and Pandey will rotate strike. Uthappa gradually reached his 19th half-century off 27 balls.

A couple of fours later, nonetheless, Uthappa holed out a length ball to Rashid Khan on 68.

Pandey took the centre stage and added 46 runs to the scoreboard before hit a skier in Warner’s hands. The veteran Yusuf Pathan then a six and four in the death overs, but that was all the damage he could inflict in his 21 balls. 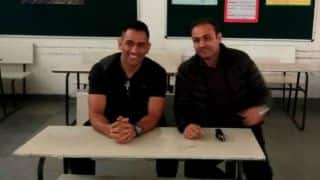