Mumbai Indians (MI) became the first team to qualify for playoffs of Indian Premier League (IPL) 2017. They walloped Royal Challengers Bangalore (RCB) by 5 wickets, replacing Kolkata Knight Riders (KKR) at the top of points table. As a matter of fact, Mumbai have lost only 2 of 10 games, both against Rising Pune Supergiant (RPS). However, they will try to win as many from the remaining contests to stay in the top two in order to escape from the eliminator. Rohit Sharma was adjudged Man of the Match for his timely half-century at a crucial juncture. Full cricket scorecard: MI vs RCB, IPL 2017, Match 38

Before this game, AB de Villiers had squared off with Krunal Pandya in three innings. Off 21 balls de Villiers had faced, he meagrely managed 12 runs getting out on all occasions. All the same, de Villiers has a terrific record at Wankhede Stadium. He has smashed 184 off 100, including a scintillating 133 against the same opposition.

De Villiers’ Wankhede record eclipsed his struggle against Krunal. He collected a boundary and then a six off him. The table seemed to have turned, only until de Villiers played an uncharacteristic stroke and got a leading edge. Krunal dismissed de Villiers for 43 off 27, maintaining a clean sheet against the South African.

Karn Sharma, who replaced the injured Harbhajan Singh, took a solitary wicket of Mandeep Singh. Virat Kohli, too, could not weave his magic. Mitchell McClenaghan outfoxed him with change in pace. Rohit, at mid-wicket, made no mistake to pouch an easy catch. McClenaghan eventually ended with figures of 3 for 34.

Samuel Badree, who had taken a hat-trick in the previous contest between these two teams, did not find a spot in the playing XI. The Royal Challengers went with two spinners in Yuzvendra Chahal and Negi, and three pacers in Aniket Choudhary, Adam Milne, and Sreenath Aravind.

Choudhary drew first blood off the very first ball. He sent the man-in-form Parthiv Patel packing. Nonetheless, Jos Buttler and Nitish Rana staged a comeback from the early breakthrough and added 61 runs for the second wicket. By all means, the Royal Challengers needed a breakthrough. For that, they did not have to work hard. Mumbai gave away easy wickets, reducing to 101 for 4. Amidst this, Krunal walked off the field due to elbow injury he sustained while diving. Full cricket updates: MI vs RCB, IPL 2017, Match 38

Rohit was still at the crease. He struggled to find his feet at first, but got in the groove with a couple of boundaries, the best being a delightful cover-drive. With 30 needed off 18, the game would have shifted to anyone. However, Hardik ended the 17th over with a heave over deep-midwicket with 18 needed of 12. Rohit joined the party and swept a six off Aravind to bring down the equation.

Mumbai needed 7 off the last over. Playing in his 100th game, Shane Watson was given the onus to dub Mumbai in their own den. All the same, Rohit and Hardik finished off the proceedings with one ball to spare. 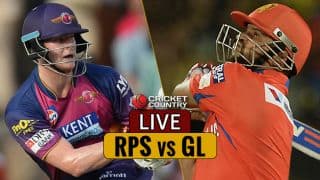 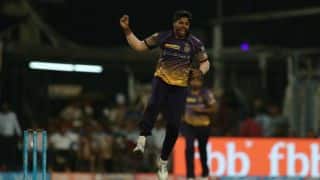