Shane Watson on Saturday hinted that he will be opening the innings for Eoyal Challengers Bangalore in absence of Virat Kohli and KL Rahul in IPL 2017.

Bengaluru: Former Australia all-rounder Shane Watson on Saturday hinted that he will be opening the innings alongside Chris Gayle in absence of injured skipper Virat Kohli and KL Rahul. “In the absence of Virat and KL Rahul, there are chances that I would be asked to bat at the top a position which I enjoy the most and have been doing well, all his career. However, he will be happy to bat at any position,” Watson told reporters at the RCB training session on Saturday. Rahul will undergo a shoulder surgery in London, while Kohli has also been advised rest after sustaining a right shoulder injury during a Test match in Ranchi against Australia. IPL 2017: KL Rahul ruled out of IPL 10

Admitting that missing Kohli is a huge setback, Watson is confident that younger players like Sarfaraz Khan and Mandeep Singh would step up and contribute for the team. “It will be challenging for us to miss the services of Virat Kohli and KL Rahul for few games, but the team has players like Sarfaraz Khan, Sachin Baby and Mandeep Singh, who could be good replacements,” he said. Asked what would be his role in terms of leadership in the absence of Kohli, Watson said that it won’t change much from earlier years during which he has been helping the younger bowlers. IPL 2017: Virat Kohli could miss initial stages of IPL 10

“Whether Virat is leading the side or not, I have always been helping anyone whenever the need arises. I help out the bowlers, especially,” he said. Watson said that once Brad Hodge has apologised for his unsavoury comments about Virat Kohli, one should put an end to the matter. “I think in the end, Brad Hodge realised his mistake to have said something like that, especially against someone like Virat, who loves playing at the highest level.”

Hodge had apologised for his comments that India captain Kohli had pulled out of the series-deciding Dharamsala Test to save himself for the IPL campaign. Kohli had pulled out of the fourth Test due to a shoulder injury and Ajinkya Rahane led India to a eight-wicket win, helping the hosts seal a 2-1 series win. Hodge’s comments were criticized and it appears he feared that his own IPL stint as Gujarat Lions coach could be in jeopardy. 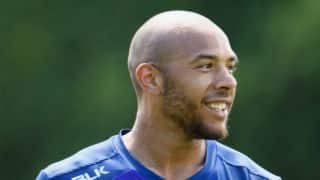