Steven Smith hailed RPS for the comprehensive win and called it a complete performance.

The contest between Virat Kohli and Steven Smith does not seem to end this season. After the controversial Test series, it was time for the Kohli-led Royal Challengers Bangalore (RCB) to take on the Smith-led Rising Pune Supergiant (RPS). Riding on heroics from Manoj Tiwary and Ben Stokes, Smith’s Pune won the Bangalore-leg of the contest and on Saturday, RPS once again registered a thumping win over RCB at Pune. At Maharashtra Cricket Stadium, Pune, RPS restricted RCB to 96 for 9 to register a 61-run win. FULL CRICKET SCORECARD: Rising Pune Supergiant (RPS) vs Royal Challengers Bangalore (RCB), IPL 2017, Match 34 at Pune

Smith hailed his side for the comprehensive win and called it a complete performance. “It’s nice to have a got a nice little streak going. We didn’t know what would be a good score at the halfway mark, to be honest, but we wanted a complete performance today and we got that,” said Smith during the post match presentation.

The Australian went on to praise Lockie Ferguson, who registered surreal figures of 4-0-7-2. Showering praise on the 25-year-old New Zealand pacer, Smith added, “We executed our plans really well tonight, Lockie Ferguson bowled beautifully. They (bowlers) are being very consistent for us, hopefully, then can continue it and win us a few more games. It is a magnificent effort from Lockie, hit good lengths and bowled good bouncers as well. He is an exciting player for the future.” ALSO READ: RPS v RCB, match 34: The stranded Kohli and other highlights

Smith also called Rahul Tripathi and Tiwary ‘big players’ for the side going forward in the to urnament. Tripathi has been impressive as an opener and contributed with a 28-ball 37 on Saturday, while Tiwary continued his consistent run and was unbeaten on 44 off 35 balls.

RPS will play Gujarat Lions (GL) at Pune on May 1, which is also the Maharashtra Day. 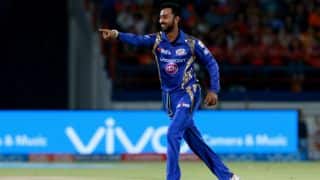