RCB England speedster Tymal Mills feels that getting bogged down by the pressure of his whopping Rs 12 crore price tag can only lead to failure.

Bengaluru: Royal Challengers Bangalore‘s (RCB) England speedster Tymal Mills feels that getting bogged down by the pressure of his whopping Rs 12 crore price tag can only lead to failure which is unacceptable. “I am not putting pressure on myself because of the money. Because if you do that, then you are setting yourself up for a failure. I am just going to back myself and do what I have been doing for the last two years the last six months especially,” Mills told reporters during RCB’s practice session at Chinnaswamy stadium. Known for his ability to bowl fast with interesting change ups, Mills said that he will be bowling same stuff that has given him success.

“I am not going to change what I have done so far. I am confident with what I do, how I have become successful so far. I am going to come and be aggressive with the new ball and then be smart with my change-ups as the innings goes on,” he said. Replying to a query, Mills said T20 is see-saw battles of fortune as one match goes in players’ favour and in another, it does not. Hence it is necessary for any player to remain level-headed in such situations.

“I understand you are not always going to do well. T20 is a game which is so up and down. In one game, you can take 4 for 10 and then go 0 for 50 in the next game. You have got to be able to temper your expectations and make sure you are level headed, especially when I am going to play half of my games here,” he said. On acclimatising the hotter conditions here, Mills said he has played a lot in the sub-continent and UAE in the past and knows the conditions in this part of the world.

“I have played a lot in Asia over the last year. I have toured Sri Lanka twice, Bangladesh twice, UAE recently and India previously. I have played a lot of cricket in sub-continent. Conditions won’t be alien for me,” he said. Mills said it will take some time to get adjusted to the heat and humidity in India after coming from cooler confines of England. “It is about getting adjusted to the heat and stuff. I was in England for last two weeks where it was pretty cold 6-7 degrees. It will get a few days to get used to that. I feel well prepared and look forward to doing well,” he said.

Mills also spoke about setting expectations appropriately as the average score here at Chinnaswamy is 200 runs. “200 is the average score is what I believe. You have got to set your expectations correctly and I back myself to play more games well than I play badly,” he said. A back problem has prevented Mills from playing any other format and he doesn’t bowl more than four overs. He recollected the day when Sussex management in consultation with team doctors suggested him to retire.

“It was a two-day period. I had all my tests done and sat down in boardroom with doctors and the chief executive at Sussex, and I was offered retirement,” he said. Mills said he is hopeful of doing good for 8 to 10 years and hopes this won’t be his last IPL, despite his back injury. “I am only 24, so hopefully I can do this for a good 8-10 years. You never know. This is all I focus on and hopefully this won t be my only IPL,” he said.

“T20 option was recommended to him. The back injury and other problems, I had only occurred when I bowled 14-15 overs in a day. This is all I do now and there has been no recurrence. Of course, as all bowlers do, I pick up other injuries like knee, ankle, but I have come here in good health,” he concluded. 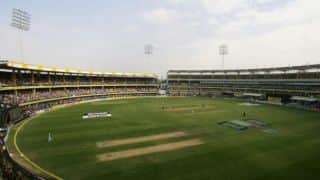