For those unaware, Salt Bae is the name given to Turkish chef Nusret G k , who owns a chain of Turkish steak houses.

Chris Gayle returned to form with a blistering innings of 77 off 38, which included five fours and as many as seven sixes in Match 20 of the Indian Premier league (IPL) 2017 between Royal Challengers Bangalore (RCB) and Gujarat Lions (GL) on Tuesday. Gayle got to his fifty off just 23 deliveries, with a big six off Shivil Kaushik over long on. The song Champion sung by Dwayne Bravo was such a hit and Kohli celebrated with Gayle with the song s trademark moves. But while returning to the crease Gayle did the Salt Bae celebration. He slammed his bat with his hand, and then seemed to sprinkle something on it. FULL CRICKET SCORECARD: Gujarat Lions (GL) vs Royal Challengers Bangalore (RCB) IPL 2017, Match 20

For those unaware, Salt Bae is the name given to Turkish chef Nusret G k , who owns a chain of Turkish steak houses. The way he would sprinkle salt on the steak and the way he went about his cooking became an internet sensation. Gayle, who is known for his carefree and funny side, decided to celebrate his fifty with that celebration on Tuesday. Gayle came in place of AB de Villiers, who was ruled out just hours before the match due to injury. Samuel Badree too was injured and Australian batsman Travis Head took the leg-spinner s place in the XI.

VIDEO: The time when the Gujarat Lions knew what ‘bit’ them – @henrygayle https://t.co/cxfdRIHmzM – @RCBTweets #IPL

RCB with that 21-run win over GL have made some progress in the IPL 2017 points table. RCB moved from the bottom of the table to sixth place and now have four points from their six games, which include two wins and four losses. Their next match will be against Kolkata Knight Riders (KKR) at the Eden Gardens on April 23. 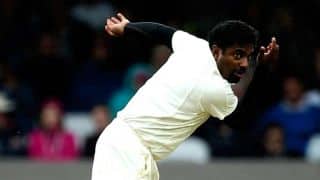