Guptill first played a breezy knock at the top and then plucked a stunner-of-a-catch of Simmons to turn the tide in his side s favour.

Martin Guptill has had an indifferent time in the Indian Premier League (IPL) so far. Last year, despite being the top-ranked Twenty20 International (T20I) batsman, he was ignored at the IPL player auctions. It was only after Lendl Simmons was ruled out due to an injury that Guptill was named his replacement for Mumbai Indians (MI). However, he failed to leave an impression. This year, after being released by MI, Guptill was picked by Kings XI Punjab (KXIP) at the auctions. Again, he did not do anything worth mentioning till the game against Mumbai on Thursday, where he first played a breezy knock at the top and then plucked a stunner-of-a-catch of Simmons to turn the tide in his side s favour.

Guptill, who scored 36 off 18 balls and added 68 runs for the first wicket with Wriddhiman Saha in just 5.3 overs, was fielding at long-on when Simmons smacked a full toss from Punjab skipper Glenn Maxwell in his direction. The Kiwi opener timed his jump to perfection to pull off a one-handed screamer. The wicket came at a crucial stage when Mumbai were going hammer and tongs, placed at 106 for 1 in the 10th over, with Simmons going strong on 31-ball 59. It gave Punjab a much-needed breakthrough as a few more quick wickets followed before Kieron Pollard took it to the wire. Watch the catch here:

Interestingly, Guptill shut the door on Simmons knock, whose injury had opened the IPL doors for him last year. Simmons could not believe what he saw, neither did the Mumbai Indians owner Akash Ambani, who witnessed it from close quarters sitting near the boundary rope. The fans too were left mesmerised.

In the end, KXIP won the game and earned two valuable points to stay alive for a play-off spot. All they now need is to win their last match as well, against Rising Pune Supergiant (RPS) on Sunday, and then hope other results to fall their way, to make it to the playoff. 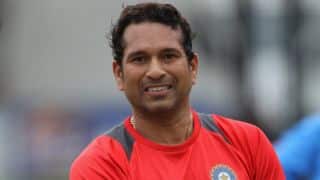 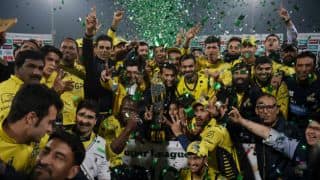