Responding to Zaheer s taunt that he is incapable of cooking, Yuvraj said that Zaheer should not be making tall claims as he has eaten omelettes made by himself.

Star Indian cricketers Yuvraj Singh and Zaheer Khan go back a long way. The southpaws had started their ODI career in the same match during the ICC Knockout Trophy in 2000. Since then, in over a decade and a half-long association, the two players have remained best of friends on and off the field. This means that both of them know a fair bit about each other, especially each others secrets. Yuvraj, on this occasion, revealed a secret about his friend Zaheer. In a latest chat show hosted by Gaurav Kapur, Yuvraj joked about life and former as well as current teammates.

Responding to Zaheer s taunt that he is incapable of cooking, Yuvraj said that Zaheer should not be making tall claims as he has eaten omelettes made by himself. Yuvraj also claimed that when it comes to being lazy on field, it is none other than Zaheer himself. Yuvraj also went on to call his Team India and Sunrisers Hyderabad (SRH) teammate in Indian Premier League (IPL) Ashish Nehra a stingy person. Moreover, Yuvraj also called Virat Kohli the second-most stingy person after Nehra. Watch him talk and joke about life in a candid chat with Gaurav Kapur here:

Later in the chat show, Yuvraj also revealed that his wife Hazel Keech is the only bowler at home and that she bowls innumerable bouncers at him without any warning. Hazel can be seen cheering for Yuvraj from the stands during SRH games in the ongoing IPL 10. His side SRH is doing well at the moment, having won both their games. Yuvraj played a pivotal role in the tournament opener against Royal Challengers Bangalore (RCB), scoring a match-winning fifty. His side will next play Mumbai Indians (MI) at Wankhede Stadium in Mumbai in an away fixture. 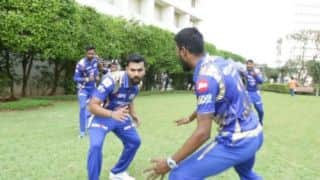