Pant scored 57 off 36 balls in the match, coming in straight after his father's demise. But his side fell short of the target by 15 runs. His skipper Zaheer Khan also praised him after the match.

Prodigious talent Rishabh Pant suffered a personal tragedy on Wednesday night when his father Rajendra Pant passed away in sleep following a cardiac arrest. The young cricketer, who was in the capital city training with the Delhi Daredevils (DD) squad for the ongoing season of Indian Premier League (IPL), rushed to his hometown in Roorkee to perform his father’s last rites on Thursday. With DD scheduled to play their first match in IPL 10 on Saturday against the Royal Challengers Bangalore (RCB) in Bengaluru, Rishabh s participation was naturally uncertain in the wake of the tragic developments. Though he joined back just in time on the eve of the first match, whether or not he would play was still in doubt.

However, the youngster not just played the first game, but also hammered a gritty fifty to almost take his side home. He lacked support from the other end, which resulted in his side s loss. But Rishabh earned accolades from all quarters for showing up despite the personal tragedy and playing so well under pressure. Team India star Yuvraj Singh, who was a part of the team when Rishabh made his T20I debut against England earlier this year, posted a heart-warming message for the youngster, praising his spirit. Yuvraj took to his Twitter account and wrote: “Sorry for the loss of your father Rishab Panth still batted really well under pressure tough to deal mentally All credit to @RCBTweets,” tweeted they left-hander.

Commentator Harsha Bhogle also praised Pant for his resolute innings by posting a couple of tweets:

Really feel for young Rishabh Pant. Losing your father is a terrible blow and cricket is only a weak balm. But at least it is a balm

He’s 20,been performing the last rites for his father & he’s come to play a special innings for #DD. Rishabh Pant is going to be some player

We’ve just witnessed a special innings from a special player…Rishabh should be the present of Indian cricket. He’s the future for sure.

Pant scored 57 off 36 balls, but his side fell short of the target by 15 runs. His skipper Zaheer Khan also praised him after the match, saying, “He played well, and just needed support at the other end. Pant showed a lot of courage, he has undergone personal trauma, we are all with him. 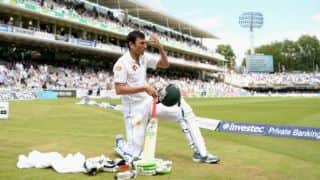 Younis Khan should be called as 'Unique Khan' from now: Shoaib Akhtar