In-form Vidarbha middle-order batsman Apoorv Wankhade feels that his good showing in the Ranji Trophy and Irani Cup has helped him mature as a T20 cricketer and that will hold him in good stead when he turns out for the Kolkata Knight Riders (KKR) in the Indian Premier League (IPL) this season.

“I have always had a knack for T20. I enjoy the format and I can express myself. This season, I have done well in red-ball cricket. The Ranji Trophy season went well and I was among runs. I think my Ranji and Irani form has helped me mature as a T20 cricketer,” Wankhade told IANS in an interview here.

More recently in the Irani Cup, the 26-year old notched up a career-best unbeaten 157. “Everyday before going to bed, I have it planned in my head what I want to do the next day. I think of the areas I need to work on, my fitness. I break down my training and want to improve after every session,” said Wankhade on his secret to keeping good form of late.

Wankhade was rewarded for his consistency in domestic cricket as KKR picked him in the IPL auction for his base price of INR 20 lakh. “I have been hitting the ball in the last three years. In the IPL, I won’t change my game. Like I play for my state, I will do the same for KKR as well,” a confident Wankhade said.

Wankhade said he is looking forward to meeting big names like Mitchell Starc and Chris Lynn in the KKR squad and would aim to learn how they approach the game and handle pressure. He added that skipper Dinesh Karthik‘s recent pyrotechnics (29 off 8 balls) for India in the final of the Nidahas trophy T20 tri-series against Bangladesh has inspired the finisher in him.

“I am looking forward to meeting all of them. I have just watched them on television. I want to learn how they approach the game and handle pressure. I want to see their mindset and learn from it,” Wankhade said. “Like DK, the way he finished the game for India against Bangladesh in the final, I want to get inside his head and know how he thinks during those final overs,” the MS Dhoni fan added.

Wankhade wants to keep working hard for a India call up. “I am working hard and that’s why I got picked to play in the IPL from my state. Things will fall into place if I continue working hard and not think too much about the result,” he signed off. 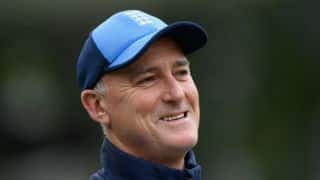