The MCA has been given a deadline of April 18 to respond to this notice.

Bombay High Court on Friday issued a notice to Maharashtra Cricket Association (MCA) and sought reply on how they will arrange water for maintaining the ground for the Indian Premier League (IPL) matches to be held in Pune.

The development comes a day after the remaining IPL matches of Chennai Super Kings were shifted from the state to the Maharashtra Cricket Association’s (MCA) International Stadium in Pune in the wake of the ongoing protest against the Centre’s negligence for the formation of Cauvery Management Board (CMB).

Issuing the notice, the Bombay High Court asked the MCA to explain how they would arrange water for preparing and maintaining ground in Pune to conduct matches of IPL shifted from Chennai to Pune.

The notice was issued in a Public Interest Litigation (PIL) filed by the NGO Loksatta Movement in 2016. In the same petition, Bombay HC had earlier ordered to move all the IPL matches out of Mumbai’s Wankhede stadium during the ninth edition of the tournament in 2016.

During the hearing of their petition, Loksatta argued that Pune gets water supply only from Pawana river and that if the ground is to be prepared for IPL matches a lot of water would be needed which eventually affect the water supply of the prevailing drought-like situation of the state.

The MCA has been given a deadline of April 18 to respond to this notice.

Earlier, CSK made a happy homecoming at MA Chidambaram Stadium and went on to beat Kolkata Knight Riders in the last-over thriller on Tuesday.

However, the clash was marred by controversy as 21 Naam Tamilar Katchi (NTK) party workers were arrested and sent to Puzhal Central Prison for holding protests over Cauvery issue outside Chennai’s Chepauk Stadium in a bid to stop the match.

The arrested party workers were charged for beating up policemen on duty who were deployed to curb the protest and ensure the match to be held between Chennai Super Kings (CSK) and Kolkata Knight Riders (KKR) was played without trouble.

The protestors were demanding that the IPL matches not be held when a more pressing matter – the Centre’s failure to constitute the Cauvery Management Board (CMB) – was at the fore. 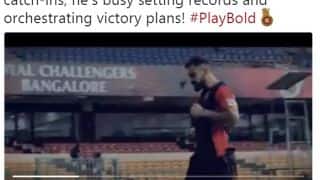