Dinesh Karthik backed the domestic VJD method over DLS and wants to be considered in IPL in the future.

Kings XI Punjab (KXIP) defeated Kolkata Knight Riders (KKR) by 9 wickets in match 18 of Vivo IPL 2018 at Eden Gardens, Kolkata. KKR posted a decent 191 after being put to bat. Chris Lynn was their highest scorer, with 74 off 41 balls. However, KXIP bowled tightly in the death overs and only conceded 11 off the last 2. Chris Gayle and KL Rahul then gave KXIP a rollicking start, adding 116 for the first wicket on either side of a rain break. KXIP however chased the DLS revised total of 125 in 11.1 overs. In the post-match press conference, KKR captain Dinesh Karthik lauded Player of the Match Rahul: ” It’s a bad day and not Chris Gayle’s day. I’d say it is not a Chris Gayle’s day because the way KL also played, I think he played beautifully as well. He kind of played some lovely shots and it isn’t generally that it is a Chris Gayle’s day that he is the only one scoring. KL also played a fabulous knock.”

What about Andre Russell, who hobbled out with a hamstring injury? “Honestly, I haven’t spoken to him, but he looks okay for now”

When Karthik was asked about why he did not use spinners against Gayle, he said there was no such strategy in place: “He has scored runs in every game. So there is no pattern I’d say that the teams have found out yet. He is batting really well and you got to accept that.”

Karthik also spoke about the DLS method being hard to understand. He backed the domestic VJD method instead: “We needed two wickets at that stage and then you start putting pressure on them. It was important to get Gayle and KL early, but they played some good shots and got away. When the rain stopped (the play) they needed 8 runs an over but after the DLS they came back and it was like six runs an over or run an ball, it was really surprising. I am sure DLS has been something that people are trying to figure out it is. 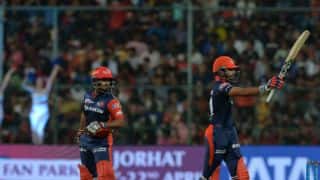 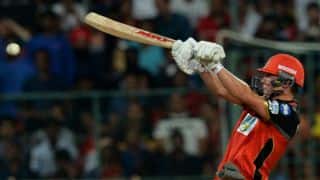