CSK will be hoping to register their third IPL final win, while SRH would be eyeing their second championship run.

Fifty days, and we head to the 60th match, the final of IPL 2018. Chennai Super Kings (CSK) and Sunrisers Hyderabad (SRH) will contest the tournament final at Wankhede Stadium, Mumbai. It s a fitting finale as these two sides have been the best of the lot by some distance. Hyderabad finished the league stage by topping the table. Chennai came a close second, but have managed to beat the league toppers on all three occasions this season. In fact, the sides clashed in the Qualifier 1 at the same venue where Faf du Plessis pulled off a heist.

Chennai might have had the upper hand in all the three contests but two of the three wins were far from convincing. When the sides met at Hyderabad, SRH were just a hit short of a win. On Tuesday, Chennai were reduced to 66 for 6 in their chase of 140 before du Plessis and Shardul Thakur did the improbable to sail them to their seventh IPL final.

Meanwhile, SRH s losing streak was on verge of an extension at Eden Gardens on Friday before the Rashid Khan resistance. Rashid produced one of the greatest all-round spectacles (34* off 10 balls, 4-0-19-3, 2 catches, 1 run out) to knock Kolkata Knight Riders (KKR) out.

No, CSK do not start favourites. They, too, had succumbed to Rashid on Tuesday. CSK may have two IPL silverwares in their cabinet but they have also lost four times in the final. Their last IPL glory came in 2011. The next three finals were defeats. Like the city of Chennai, Hyderabad, too, have two titles to their name but the first was bagged by the now defunct franchise Deccan Chargers.

To SRH s credit, this is their second final from six appearances. They won the tournament in 2016. Kane Williamson, Shikhar Dhawan, Bhuvneshwar Kumar, Bipul Sharma and Deepak Hooda are among the survivors from that squad.

– Ravindra Jadeja had a dismal April, averaging 57.5 with ball and going at 8.21. In May, he has turned the tables. His economy rate is 6.56 and bowling average is just over 20

– Shardul Thakur is the most successful CSK bowler this season with 15 wickets from 12 matches at 26.66; his economy rate of 9.16

– SRH defended 118 at Mumbai against MI. They almost defended 140 at the same venue against CSK in Qualifier 1. They have defended not-so-big totals five times this season.

– Their batting has been heavily reliant on Dhawan (471) and Williamson (688). In fact, Williamson is the Orange Cap holder

– Rashid and Siddarth Kaul have 21 wickets each while Shakib Al Hasan has 14. Bhuvi and Sandeep Sharma have been impressive in patches

– They have been the top bowling side in this tournament, giving way runs at 7.89 an over and averaging just over 24

– It is clear that the contest will be between Chennai s batting against Hyderabad s bowling.

Strengths: Both CSK and SRH have been led brilliantly. Dhoni s experience and tactical acumen set him apart in shorter formats, while Williamson has kept learning and improved. CSK have relied on experience and horses for courses method, whereas SRH have been more about meticulous planning.

I have a lot of cars and bikes in my house. I don t ride all at a time. A lot of times, especially when you have six to seven bowlers in the side, you want to see the conditions, you want to see who is batting and what is needed at that point of time. I see what is in best interest of the team, Dhoni said on the eve of the match.

Harbhajan Singh has played 13 matches out of the total 15 played by Chennai and has 7 wickets in all. He wasn t used against Hyderabad in Qualifier 1. The wicket is expected to be not very different to that of Tuesday s. If that is the case, the spinners could be in for a ball. The dimensions at Wankhede aren t the biggest and if the wicket slightly favours the batters then over reliance on spin could backfire.

With due respect to Harbhajan s experience and knowledge of Wankhede, will CSK be tempted to bring in a wrist-spinner to match Rashid s effectiveness. They have Karn Sharma in their ranks and if the surface holds up, who better than Imran Tahir?

You never know the surprises that Dhoni can pull off.

(Trivia for the ones with raised eyebrows: Murali Vijay smacked 52-ball 95 against RCB in IPL 2011 final to guide CSK to a win. He slammed a match-winning half-century in Champions League T20 final the same year. Vijay s 58-ball 113 in Qualifier 2 of IPL 2012 downed Delhi Daredevils. He also got a breezy 42 in the final. He knows a thing or two about big games.)

Sunrisers showed courage by benching their most expensive buy Manish Pandey for the Qualifier 2. Pandey s dismal form hasn t helped SRH but his experience can come in handy for a game as big as final. Pandey has a penchant for scoring in big games. He had won KKR their second title by slamming a 50-ball 94 in IPL 2014 final. Pandey s hundred in Ranji Trophy 2010 final saw him almost defy the odds. He may make the difference in a brittle batting line-up if he comes in for an out-of-form Hooda.

SRH threw young Khaleel Ahmed in deep waters by picking him in the Qualifier 2. Understandably, KKR went after him. The experienced CSK will do the same and SRH can t afford to have weaklings for a summit clash. They shall look to bring back the tried-and-tested Sandeep.

Given the history, the odds are heavily stacked against Hyderabad. Chennai are clear favourites and it won t be a surprise if the otherwise blue-looking Wankhede stands are more yellow than orange on Sunday. The chants of Dhoni Dhoni is amongst the easiest of predictions.

For the Orange Army, all they should hope is to continue their brilliance with the ball and hope for a repeat of trends from IPL 2017 between Rising Pune Supergiant (RPS) and MI. Mumbai had lost thrice to Pune in the tournament, including one in Qualifier 1. However, where it mattered the most, MI beat RPS in a thrilling final to claim their third trophy. 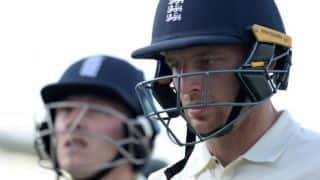