Kings XI Punjab needed 42 off 4 overs when Bumrah came back for his third spell and gave away 10 runs off 2 overs, claiming 3 wickets that included KL Rahul's.

Mumbai Indians (MI) did what they do. They won another thriller at the business end of the tournament to keep their VIVO IPL 2018 hopes alive. They were almost rolled over by the KL Rahul juggernaut before Jasprit Bumrah’s brilliance tilted the scales in their favour. Bumrah finished with 4-0-15-3 to thwart Rahul’s 94 and Andrew Tye’s 4 for 16, helping MI thrive in the Match 50 of the tournament by 3 runs.

KXIP needed 42 off 4 overs when Bumrah came back for his third spell and gave away 10 runs off 2 overs, claiming 3 wickets including Rahul’s. Rahul, who fetched INR 11 crores in the IPL 2018 auction, proved worth of every penny. He fell to Bumrah in the penultimate over for 94. The game swung like a pendulum with KXIP holding upper hand most of the time.

Mumbai started well without much luck in the early stages. Rahul got a top edge for six in the first over of the innings, from Mitchell McClenaghan. Bumrah started with a 1-run over. Punjab made it count in the following over, the first from Hardik Pandya: two edges went for four, while Chris Gayle hit a six and Rahul gloriously drove one for four.

McClenaghan changed ends and Gayle started the over with a four. Then the change in length did the trick for Mumbai. Gayle fell to a short ball yet again, miscued a pull and playing straight to Ben Cutting at deep mid-wicket.

Aaron Finch joined Rahul and the duo added 111 in 74 balls for the second wicket. Rahul was at his fluid best, cutting and driving for runs at will and brought up his sixth fifty of the season. He also became the first player to bring up 600 runs this season, reclaiming the Orange Cap.

Hardik, who has been brilliant with the ball for MI this season, was taken for plenty in his first 3 overs. Rohit Sharma trusted him with the important 15th over when KXIP needed 11 an over. Hardik started the over with 2 wides but ended up giving away just 6, which propelled the asking rate to 12.

Mumbai risked Mayank Markande with the 16th over. He started well, giving away just 6 from his first 4 balls before Rahul ended the over with consecutive sixes. Then Bumrah responded to the crisis by sending back Finch in his final burst. The mishit was nabbed by a brilliant judged catch by Hardik. Bumrah stuck again in the over, dismissing Marcus Stoinis with the fifth ball.

Ravichandran Ashwin, not for the first time in the day, surprised all by promoting Stoinis and Akshar Patel ahead of Yuvraj Singh and Manoj Tiwary. Bumrah’s 4-run over took made the equation read 38 off 18.

Rahul took 15 off Ben Cutting’s over but Bumrah pulled it back in the next over. He gave away only 6 and had Rahul caught at long-off.

Seventeen off McClenaghan’s final over was not going to be easy. In the end KXIP fell 3 short.

Earlier, Kieron Pollard had blasted a 23-ball 50 to help Mumbai to a big total. MI could have been restricted to a smaller total had Ashwin bowled himself or Tye during the Pollard carnage.

Tye became the first bowler in history of IPL to bag 3 four-fors in a season and Ashwin came back late in the 16th over to dismiss Pollard.

More on the first innings

With this win, Mumbai moved to the fourth spot in the IPL points table.

Player of the Match: Jasprit Bumrah. 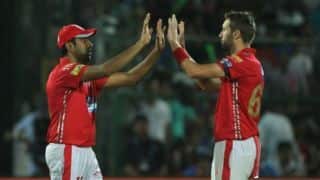 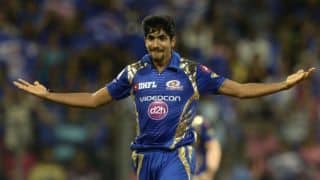