Sunrisers Hyderabad remain unbeaten in the tournament, so far, and will lock horns versus Kolkata Knight Riders at Eden Gardens, Kolkata.

Everyone talked about how David Warner’s absence would hurt and harm Sunrisers Hyderabad ‘s (SRH) team combination ahead of VIVO IPL 2018. However, after 1/10th of the current edition being over, SRH find themselves at the top spot in the points table. Their bowling unit has looked the most impressive, and their batsmen have got a feel of the ‘intense pressure’ following a nerve-wrecker against Mumbai Indians (MI) on Thursday. The table-toppers now play their first away game; versus Kolkata Knight Riders (KKR) at Eden Gardens, Kolkata on Saturday’s second and final encounter.

Talking about SRH, their team management deserves praise for adjusting the team according to Kane Williamson’s style of play. The in-form bowling unit: Bhuvneshwar Kumar, Siddarth Kaul, Sandeep Sharma, Rashid Khan, Shakib Al Hasan and Billy Stanlake (has taken important wickets despite being expensive) are delivering in tandem. Shikhar Dhawan has taken charge of proceedings in Warner’s absence. After a wake-up call against MI, the middle order would be expected to revamp. The likes of Williamson, Shakib, Yusuf and Manish Pandey need to take more responsibility. Deepak Hooda can continue to don the finishers’ role.

For KKR, they won their first game comprehensively versus Royal Challengers Bangalore (RCB) at home. Their somehow dropped the second encounter versus Chennai Super Kings (CSK) despite being on top for most parts. With a firing Andre Russell, composed Dinesh Karthik, ever-dependable Sunil Narine, experienced Robin Uthappa’s and power-hitter in Chris Lynn, KKR have enough firepower to strangle the opposition at home. Their home record is impressive, whereas SRH aren’t the most daunting tourists.

It would be harsh to replace Sandeep Sharma after his two-for in the previous outing. SRH maybe tempted to play a batsman less at seam-friendly Eden pitch (for initial overs at least). Bhuvi, if fit, will walk into the side but at the expense of which player? SRH lost their last encounter versus KKR at Eden Gardens. KKR have won two of their last three clashes versus SRH. Current form keeps SRH ahead, but KKR have a superior record taking recent matches into account. 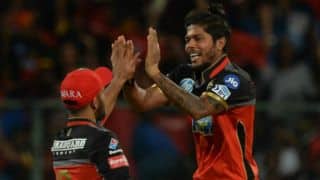