This is also the first 4-wicket haul for CSK this season. The previous best was Deepak Chahar’s 4-1-15-3.

Lungi Ngidi of Chennai Super Kings (CSK) registered the best figures by an overseas bowler in Match 56 of Indian Premier League (IPL) 2018, against Kings XI Punjab (KXIP) at Chennai’s adopted home, in Maharashtra Cricket Association Stadium, Pune. Ngidi finished with 4-1-10-4, thus improving on Doug Bollinger’s 4-1-13-4, against Deccan Chargers (DC) at Navi Mumbai, back in 2010. The list of best IPL figures for CSK is dominated by Ravindra Jadeja, who features thrice in the top five. Jadeja also holds the best figures ever for CSK.

Ngidi also registered the second-best figures in IPL 2018, after Ankit Rajpoot (4-0-14-5) against Sunrisers Hyderabad (SRH) at Hyderabad. Shreyas Gopal and Andrew Tye (both 4 for 16) have now been pushed down to third position.

Ngidi had to return home after his father passed away. He missed the early stage of the IPL 2018 but came back to take 9 wickets in 5 matches with an economy rate of 6.11. Of CSK bowlers, only Shardul Thakur (14 wickets in 11 matches) and Dwayne Bravo (11 in 11) have more wickets. 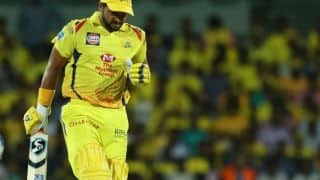