In pursuit of 139 against Kolkata Knight Riders, Sunrisers Hyderabad (SRH) were helped by a brisk start from Wriddhiman Saha. Orange Cap holder Shikhar Dhawan then failed and SRH were reduced to 55 for 3 inside 9 overs. Kane Williamson’s calmness and Shakib Al Hasan’s handy contributions ensured no major hiccup, and a 5-wicket win at Eden Gardens, Kolkata. This is SRH’s first victory versus KKR at Eden Gardens, Kolkata.

Saha whacked Mitchell Johnson early to display his intentions. However, his stay didn’t last longer due to Dinesh Karthik’s smart glovework off Sunil Narine. Dhawan followed suit. He was clean bowled on an off spin off Narine, and SRH began to slide. Narine’s first 2 overs leaked only 4. Karthik resorted to his spin trio Piyush Chawla, Narine and Kuldeep Yadav in the middle overs. Kuldeep resulted in Manish Pandey’s , former KKR player, dismissal. He was trapped lbw for 4 (11).

At halfway stage, both teams had a realistic chance with the equation reading 77 off 60 balls. Williamson found some boundaries off Kuldeep, as the Indian wrist spinner went overboard with his lengths. In addition, Karthik needed one good over from his pacers but Andre Russell failed. Russell, bowling the 12th over, leaked 16 runs to tilt the match in SRH’s favour.

Williamson lost Shakib, bowled Chawla, but carried on to prevent any collapse (like the one against Mumbai Indians on Thursday). His fourth IPL fifty took the side to their third win on trot.

Earlier, KKR were jolted by a needless batting order experiment. Lynn (49) top-scored but looked rusty. Dinesh Karthik’s 27-ball 29 pushed the innings to some extent, but Bhuvneshwar Kumar, Billy Stanlake and Shakib’s bowling efforts dominated proceedings. In addition, the fielders responded and held onto their catches. 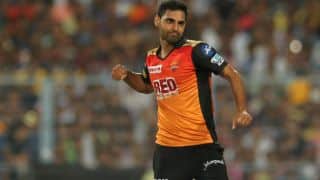