Chennai Super Kings (CSK) move to the top in the points table with a 13-run victory over Delhi Daredevils (DD) in Match 30 of VIVO IPL 2018, while DD retained the position. In pursuit of 212, DD were kept in the hunt courtesy valiant efforts from Rishabh Pant and Vijay Shankar. However, poor show from the top order led to their downfall. CSK’s victory was set up by onslaughts from Shane Watson, MS Dhoni and Ambati Rayudu. With ball, KM Asif chipped in with 2 wickets.

DD’s chase commenced on the wrong note. Prithvi Shaw, coming on the back of an impressive 62, fell early after a breezy cameo. He was caught by Ravindra Jadeja, giving debutant Asif his first scalp. Colin Munro took his time, and began his carnage after an expensive over from Watson. He manipulated the field, read the slow deliveries well, and combated with brute force. He fell against the run of play, mistiming a slog off Asif.

The onus fell on in-from Shreyas Iyer and Pant. The duo, DD’s highest run-getters, failed to perform collectively. A horrible mix-up resulted in the skipper’s departure. Pant was caught ball-watching, which led to Iyer getting run out. That as good as decided the match. At that stage, after 7 overs, DD were struggling at 64 for 3. Glenn Maxwell continued to disappoint. He fell to Jadeja, for the fourth time out of 11 faceoffs, and added onto the pressure.

Pant finally found a partner in Vijay Shankar. The latter didn’t get his timing right, but held one end. Pant, on the other hand, gave a glimmer of hope with occasional boundaries. However, Harbhajan Singh and Jadeja dried up the runs by mixing their lengths but couldn’t get rid of Pant.

MS Dhoni reserved Dwayne Bravo for the end overs. Pant finally looked to up the ante when DD required 84 off 5 overs. He slammed a fine fifty and looked set for more. It was a superb combination of brain and brawn, but in the end the required run rate became too much to handle for the youngster. He holed out to Lungi Ngidi.

In the end, his 45-ball 79 only managed to delay the inevitable. Shankar hit three sixes off Bravo and one more off Ngidi in the last over in his 54 not out, but DD were never really there. With this loss, their sixth, DD’s campaign is almost over.

Player of the Match: Shane Watson. 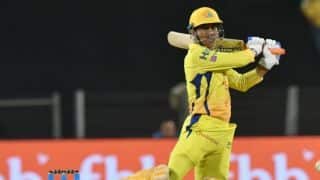 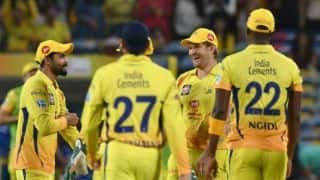