Match 48 of VIVO IPL 2018, between Kings XI Punjab (KXIP) and Royal Challengers Bangalore (RCB), was expected to be a high-scoring affair on a belter of a wicket at Holkar Stadium, Indore. With big guns like Virat Kohli, Chris Gayle, KL Rahul, AB de Villiers, Parthiv Patel, Marcus Stoinis, and Aaron Finch featuring in the contest, anything in excess of 200 was on cards. However, KXIP were crushed to pulp by RCB bowlers: they were skittled out for 88 in 15.1 overs, the second-lowest score of the season. Kohli (48* in 28 balls) and Parthiv (40* in 22) then secured the victory in 8.1 overs.

The KXIP bowlers looked as clueless as their batsmen. Ravichandran Ashwin looked charged, but something was amiss in KXIP’s performance tonight. Lack of application hurt the batsmen, whereas the bowling lacked the zing in defence of 89.

Kohli and Parthiv began in usual fashion. They certainly had the net run rate in mind, with five teams still fighting hard for the last two Playoffs spots, and upped the ante from the word go. Parthiv was immaculate against anything wide outside off. Kohli, on the other hand, added to KXIP’s woes with effortless striking. He attacked Ankit Rajpoot and Purple Cap owner Andrew Tye, and after a point the KXIP bowlers seemed to give up.

RCB batsmen scored 65.21 per cent of runs in boundaries; finishing the game with 71 balls to spare. This is RCB’s biggest victory in terms of balls remaining and fourth-biggest overall.

Talking about Playoffs spots, with Sunrisers Hyderabad (SRH) and Chennai Super Kings (CSK) have already qualified. RCB have now strengthened their chances going ahead. They have two games in the bank as well. KXIP, on the other hand, have slid two spots, to fifth, below Kolkata Knight Riders (KKR) and Rajasthan Royals (RR).

Player of the Match: Umesh Yadav. 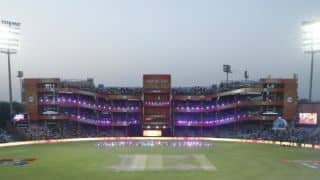 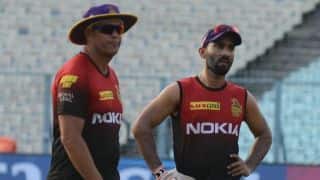