DD came agonisingly close to breaking their run of reverses, only to lose by four runs to Kings XI Punjab (KXIP) at the Feroz Shah Kotla

New Delhi: Down but not out. That’s what pacer Liam Plunkett tried to convey while summing up the mood in the Delhi Daredevils (DD) camp after suffering yet another loss in the VIVO IPL 2018. DD came agonisingly close to breaking their run of reverses, only to lose by four runs to Kings XI Punjab (KXIP) at the Feroz Shah Kotla last night.”It was really disappointing to lose such a close game. I think we should have won this match. It is really frustrating for all of us,” Plunkett said at the post-match press conference.

“It was a match we could have won… We are really disappointed.” Having lost five out of their six matches, bottom-placed Daredevils host Kolkata Knight Riders (KKR) on Friday.”We will still believe in ourselves and we know we can win. It is a matter of one win to set the ball rolling. I think we can do it in our next match,” said Plunkett. Drafted in for the injured Kagiso Rabada, the Englishman made instant impression on his IPL debut, returning with impressive figures of 3 for 17 in four overs.

“It was a great feeling to finally get a game in the IPL. I wanted to perform well for the side and I am extremely happy that I was able to take crucial wickets on my debut in the competition, he said.”From the beginning, we knew that the wicket will assist bowlers and this was really similar to the turf I played on during the 2016 ICC World T20. I played three games for England at this venue and that experience helped me in getting accustomed to the situation,” said Plunkett.

KXIP’s Andrew Tye was relieved after the team managed to prevail in a game that went down to the last ball.”Defending a low total is not always easy but we bowled tightly to win the game,” the Australian pacer said. Tye said it was a conscious decision to have young off-spinner Mujeeb ur Rahman bowl the last over from which Delhi needed 17 for a win.

“The way (Shreyas) Iyer and (Rahul) Tewatia were batting, we needed to break the partnership. So, I bowled the 18th over and our young spinner bowled the final over. Shreyas was the man, who could have done the job, especially the way he was batting. But we managed to get him out and luckily, Mujeeb did the job for us,” Tye, who picked up two wickets, added. 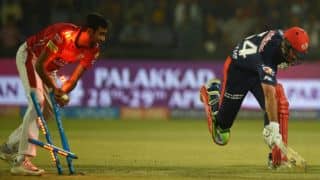