Mayank Markande ended with figures of 4-0-23-4 in the match against SRH on Thursday.

VIVO IPL has always been a platform for young talents to portray their skills and hog the limelight. MI have particularly unearthed new talents almost every year, be it Jasprit Bumrah or Hardik Pandya or Krunal Pandya and now Mayank Markande. He already dazelled in the opening 2018 IPL match against CSK with his figures of 4-0-23-3. His and Pandya’s bowled their spells with a hope to hand MI their first win. That was not to be though.

A similar story was scripted in MI’s second 2018 IPL match against SRH on Thursday. MI who were restricted to 147 for 8, saw the bowlers coming good, especially Markande who once again ended with sensational figures of 4-0-23-4. His spell went in vain once again, as Hyderabad clinched a last-ball thriller.

Hyderabad might have had the last laugh but it was Markande who was doing the rounds across the stadium, commentators were praising the young gun and his Punjab teammate Harbhajan Singh heaped praise on him over social media.

Harbhajan was part of the MI paltan since the inception of IPL. However, CSK bought his services for the 2018 IPL. Had Harbhajan been present in the MI squad, it would have been an icing on the cake for Markande.

In a chat with MI channel, Markande revealed what was it like to play alongside Harbhajan on his debut domestic season and how eager he is to pick Harbhajan’s brains: “This was the first year that I had the opportunity of meeting Harbhajan Singh. He supported me a lot when I was playing List A games for Punjab. He helped me remain in a positive frame of mind throughout and would often speak to me about bowling plans. He has immense knowledge about the game and I have managed to pick a few things from him. He is a legend of the game and I would want to meet him more often and pick his brains

Markande also credited MI skipper Rohit Sharma to allow him play his brand of cricket: “I share a great rapport with our captain. He likes to keep things simple and keeps telling me to bowl the way I would bowl for my state. He doesn t ask me to tinker with things too much. It works well for my and I enjoy bowling under his captaincy.”

P.S Markande is social media savvy. Before IPL, Markande had 2,000 followers. Today, it reads 38.8k followers and there is more to come for the 20-year old. 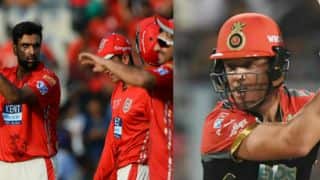