Chasing 224, Virat Kohli and AB de Villiers lit up M.Chinnaswamy Stadium in Bengaluru with their fireworks. Kohli broke a few records one of them being fastest fifty in T20 cricket. Until Kohli was around, Royal Challengers Bangalore (RCB) kept up with the asking rate. Once Kohli fell, de Villiers took over. RCB were enjoying run-chase until Rajasthan Royals (RR) introduced Shreyas Gopal into action. Gopal spoilt the party by scalping two huge wickets of Kohli and de Villiers.

Gopal’s wickets came as a breather for RR, whose every bowler was taken to cleaners. Gopal’s figures of 4-0-22-2 built up the lost momentum of RR. Kohli and de Villiers were caught in the deep. Kohli, in particular, was caught by a stunner from D’Arcy Short.

Gopal, however, was all humble in the post-match press-conference. Despite being privileged and honoured to take the wickets of Kohli, de Villiers, Gopal believes he did not bowl to best of abilities: “Yes, they were not the best balls that I got ABD and Kohli, I think the plan was to just bowl those hard lengths and make it as difficult as possible for them. This wicket was a little slower than the normal Bangalore wicket. But with the grass off I expected it to be on the little slower side after watching the previous game.”

He further added: “When it comes to getting two of the biggest players in the world, it doesn t happen every day. I just need to soak it in. I am privileged and honoured to have got their wickets. It s a moment that I will always cherish.”

Gopal also explained how he removed Kohli: “We needed a wicket at that time, and so I was just trying to bowl some good balls and make them make a bad decision or play a bad shot. And if I get a wicket that will probably stem the run rate a little bit.” 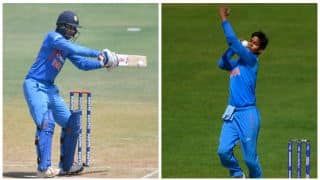