Rishabh Pant belted a 44-ball 64 as Delhi Daredevils (DD) finished with 174 for 4 in their 20 overs against Mumbai Indians (MI) in the penultimate league clash (Match 55) of VIVO IPL 2018. MI will have to chase down the total on a sluggish surface in order to advance to the tournament Playoffs. Pant’s innings was laced with 4 fours and 4 sixes. In the process he became the only cricketer to have hit a hundred boundaries in IPL 2018. Pant also reclaimed the Orange Cap with 684 runs in the season and registered the highest aggregate by a wicketkeeper in a single IPL edition. With DD already out of race for Playoffs, Pant’s phenomenal season with the bat ends here.

Mumbai’s positive NRR means a win will see them through to Playoffs. However, for that they will have to bat out of their skins against a much-improved Delhi bowling attack that restricted the mighty Chennai Super Kings (CSK) to 128 at the same venue on Friday.

DD elected to bat. Not for the first time, coach Ricky Ponting backed fellow Australian Glenn Maxwell ahead of the likes of Colin Munro and Jason Roy. Maxwell opened with Prithvi Shaw and showed an intent to dig deep, playing more orthodox strokes. DD had raced away to 30 for no loss after 3 overs when Shaw gave away his wicket to casual running.

Maxwell played the first ball from comeback man Mustafizur Rahman to Hardik Pandya at point, Prithvi strolled outside his crease and showed lethargy in returning to the crease. Hardik seized the opportunity and bulleted a direct hit at the non-striker’s end stumps to find Prithvi napping. Fizz conceded just 3 off the over. Then Jasprit Bumrah returned, and with the scoreboard pressure mounting, Maxwell retorted to his natural game and went for a wild heave to have his stumps shattered.

Once again the onus fell on Pant and skipper Shreyas Iyer. Pant began with a short-arm jab off back foot through cover point for four. He continued his sublime touch but Iyer struggled to get going at the other end. Pant belted 14 off Mayank Markande’s first over but Rohit Sharma continued with his leggie, who struck with Iyer’s wicket in his next over.

Vijay Shankar started with a brilliant cut past point off Hardik for four and played the apt second fiddle to the well-set Pant. Pant’s knock was an amalgamation of caution and calculated risks. Shankar and Pant added 64 in 47 balls for the fourth wicket to keep Delhi in hunt.

Pant smacked Hardik for 2 sixes in the 16th over one of them one-handed and plundered 16. Krunal Pandya took revenge for his brother the next over, having Pant caught at long-on. Surprisingly, Krunal only bowled 2 overs, giving away 11 and scalping the most important wicket.

Shankar was joined by another Indian Under-19 star, Abhishek Sharma. The duo added an unbeaten stand of 35 in 22 balls to help DD get to a respectable total. Shankar remained unbeaten on 43 off 30 balls and Abhishek on a 10-ball 15.

Alarmingly for Mumbai, skipper Rohit injured his left shoulder was forced out of the ground in the 19th over when he dropped Shankar at gully. Rohit’s batting will be important in this chase. 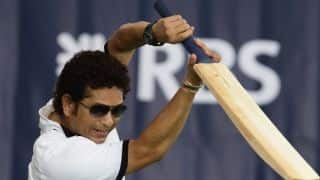 Sachin Tendulkar wants India to be a sports-playing nation